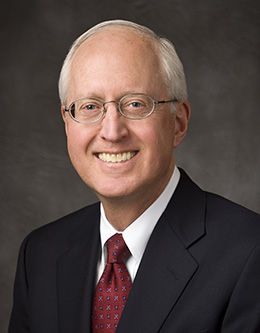 Elder Larry Y. Wilson was sustained a member of the Second Quorum of the Seventy of The Church of Jesus Christ of Latter-day Saints in April 2011. He is now serving in the Temple Department and previously served in Hong Kong as a member of the Asia Area Presidency.

Elder Wilson graduated from Harvard University with a bachelor’s degree in English and American literature. He later received an MBA from the Stanford Graduate School of Business.

His professional career involved serving as chief operating officer for Catholic Healthcare West in San Francisco and as chief financial officer for the Northern California region of Kaiser Permanente in Oakland, California. Most recently he served in Kaiser’s national organization as senior vice president for financial and strategic planning. Earlier in his career, Elder Wilson was a principal with the management consulting firm of Booz Allen Hamilton. He has also been an officer and chairman of the California Healthcare Association, which advocates health care public policy on behalf of California hospitals.

Elder Wilson has served the Church as an Area Seventy in the North America West Area and as a stake president, a bishop, and a full-time missionary in Brazil. He and his wife, Lynda Mackey Wilson, are the parents of four children.

The Return of the King