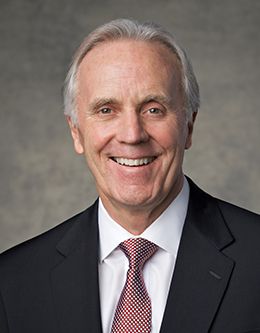 Elder Lawrence E. Corbridge was born in Moscow, Idaho, in 1949. He grew up working on a cattle ranch, where he learned the value of hard work and the benefits of endurance. These values have carried him throughout his life. Elder Corbridge has always desired to empower others, a trait which he has consistently shown throughout his studies, his career, and his service in the Church.

As a young man, Elder Corbridge served a full-time mission in Argentina. When he returned, he pursued his bachelor’s degree in finance, which he received from Brigham Young University in 1973. He then went on to complete law school, also at BYU. He graduated in 1976. During this time, he married Jacquelyn Gayle. They now have five sons. After graduation, he started a law firm in Salt Lake City. His law firm enabled him to help people solve their problems, a prime  example of how Elder Corbridge has always worked to empower those around him.

Elder Corbridge has devoted much of his life to serving in the Church. Elder Corbridge was the president of the Chile Santiago North Mission and has also served as a bishop, high councilor, and stake president. He was serving as a Sunday School teacher when he received the call to be a General Authority Seventy. He was sustained in April 2008. Through his time in this position, Elder Corbridge has fulfilled a number of different responsibilities. He has given many well-known talks, including “The Fourth Missionary,” which is read often by missionaries across the globe. He also spoke in the October 2008 General Conference and the April 2014 General Conference. His talk in 2008 was a powerful witness of the divinity of Jesus Christ. In his 2014 talk, he discussed the life of the prophet Joseph Smith and the opposition that the young prophet faced when restoring the Church.

Elder Corbridge has lived an inspiring life and encourages others to do the same through his example.