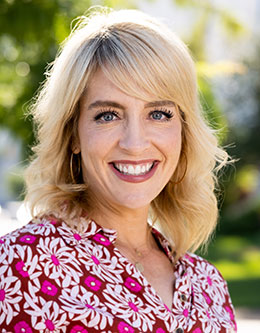 Lisa Valentine Clark is a comedian, actor, and the host of “The Lisa Show,” a family and lifestyle podcast. Before her current gig, Lisa was a host for a BYU-TV program called “Random Acts.” Additionally, Lisa was a writer, producer, and main character in the web series Pretty Darn Funny, which won best director, best ensemble cast, and best YouTube channel from the Filmed in Utah awards and ran for two years. Lisa was also a co-producer and appeared in the role of Carrie Carrington in the popular movie Once I Was a Beehive, which came out in 2015. She also plays the same character in the 2021 sequel, Once I Was Engaged. Lisa also shared her talent for making people laugh in her book Real Moms: Making It Up as We Go, which was published in 2015. The book received praise for being a relatable, comforting, and touching read for mothers, especially new mothers.

Before Lisa had become such a big name among the Latter-day Saint community she was still making people laugh, just on a smaller scale. While she worked on a bachelor’s degree in English at BYU she participated in the sketch/comedy troupe “The Garrens,” and later became a founder of the “The Thrillionaires,” another comedy group. Lisa also did some acting in BYU productions, which is actually how she met her husband, Christopher Clark. The two loved to laugh together and eventually got married and had five children. In 2013, Lisa said, “Being a mother has been the biggest focus of my life, so it impacts everything I do, especially the work I do. The funniest things that have happened to me, the saddest, the most desperate, have all come out of my identity as a mother. Parenthood is a great common human connector and in my work, I use that to connect with audiences.”1 While family is still center-stage in Lisa’s life, her focus had to shift to caring for one member of her family in specific. When Chris was only 43, he was diagnosed with ALS, a tragic and terminal illness.

In her July 2021 BYU devotional, Lisa Clark speaks extensively about her husband’s legacy, his hopeful and loving personality, and his ability to say “yes, and . . .,” a concept that Lisa got from improv. On a stage, this means accepting what the other actor offers you and adding something to it. Applied to life, it looks like taking whatever God offers you and creating a beautiful life out of it. In her devotional, Lisa says, “I have learned that a lot of humor and joy is found in the unexpected—or seeing the unexpected happen. But to see it or experience it, we have to accept the offering we have, be honest about it, and make a choice to act.”2 The love, faith, and determination of both Lisa and her husband are inspiring. Chris passed away in June of 2020, but Lisa and her family continue to remember his testimony that the “Savior is the Lamb of God, that He lives, and that he fulfilled a divine mission to redeem us from the darkness of the world.”3 In her devotional Lisa says, “In the middle of extreme fatigue, frustration, grief, and difficult work, we were blessed with joy and happiness. I will never think of Christopher’s life, or our family’s life together as a tragedy. It is an ever-changing, creative triumph.”4 Lisa continues to share her talents and life lessons learned on “The Lisa Show,” which has over 750 episodes.