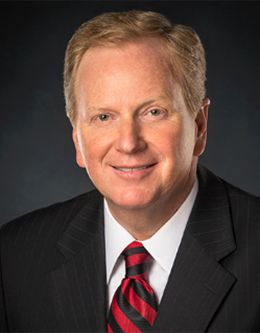 As a child, Lloyd D. Newell grew up listening to The Church of Jesus Christ of Latter-day Saints’s weekly inspirational broadcast, Music and the Spoken Word. While it was a program Newell always enjoyed, he never dreamed that one day he would be the broadcast’s longest-serving announcer, a position that he has filled since 1990.

Newell’s original professional plan included dreams of attending law school and involving himself in politics, but as graduation approached he decided to reevaluate his goals. It was then that he began to feel strongly that he should pursue a master’s degree in communications with an emphasis in broadcast journalism. Degree in hand, he entered the professional sphere as the 6:00 p.m. to 11:00 p.m. news anchor for WSEE-TV, a CBS-affiliated television station in Erie, Pennsylvania.

Newell remained in Pennsylvania for several years, but his father’s death and mother’s declining health eventually brought him home to Utah. After some time spent dabbling in motivational speaking, he began anchoring for CNN and broadcasting from around the country. Before long, this lifestyle became burdensome; Newell was married, and the necessity of constant travel took him away from his family. As he searched for a new job that would allow him to remain in Utah with his young family, Newell came across Bonneville Communications. Newell had previously done some voice-over work for the company, so he tried out for a backup announcer position. Though he was offered the job, he never had the opportunity to appear on air.

Shortly after Newell was hired as a backup announcer, Spence Kinard, the previous host of Music and the Spoken Word, retired from his position. Newell was asked to fill in on an interim basis while a permanent replacement was found. Days of filling in became weeks, and weeks became months. In November of 1990, Newell was approached by President Gordon B. Hinckley and asked to serve on a permanent basis.

Music and the Spoken Word, the oldest continuous nationwide network radio broadcast in America, has been in production since 1929. It is a Salt Lake City-based radio and television broadcast that brings together thousands of people from a myriad of faiths each Sunday morning. As host, Newell spends hours brainstorming topics and music as well as writing weekly inspirational messages that are inclusive to those of all religions. His position is not a monetarily compensated one; serving as announcer is a Church calling, not a paid job.

In his personal life, Newell is a professor of religion and family life at Brigham Young University. He completed his doctorate degree in family sciences from BYU in 1999. He is the author of numerous books, with titles including The Divine Connection, Come Listen to a Prophet’s Voice, and May Peace Be with You. He and his wife, Karmel, have four children.

In his BYU address “Walk in Newness of Life,” Newell spoke of the importance of utilizing the Atonement in our lives to overcome challenges and change to become more like our Savior. “The rigorous change required by the gospel of Jesus Christ,” he said, “is not meant to be disheartening or exhausting; it is exciting and exhilarating! The Plan of Salvation is the ultimate adventure.”

“Walk in Newness of Life”