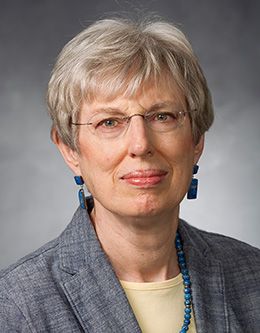 Lora Beth Larson Brown grew up in Berkeley, California. After receiving a BS in home economics educa­tion from Iowa State University and an MS in foods from Cornell University, she worked in commu­nity nutrition programs in Texas, Colorado, and the South Pacific. She joined BYU’s nutrition faculty as an instructor in 1974.
Four years later she retired from teaching to marry Kay F. Brown, associate professor and chair of the Department of Technology at BYU. After his unexpected death she jug­gled family demands to complete her EdD in secondary education at BYU. She returned to full-time teaching at BYU in 1991.
While working as an associate professor in the Department of Nutrition, Dietetics, and Food Science, she received several awards for her teaching, including the Karl G. Maeser Distinguished Teaching Award and the Karl G. Maeser General Education Professorship. Her professional passion centered in helping people improve their health, whether they are BYU students, average consumers, or impover­ished citizens of other countries. She guided several international internships for BYU students and consulted for the Ezra Taft Benson Agriculture and Food Institute in several countries.

Come Joyfully and Partake of the Gospel Feast