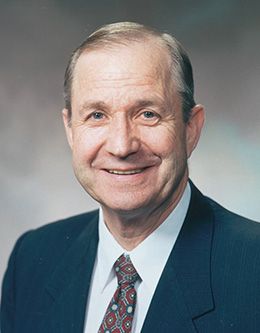 Elder Lynn A. Mickelsen was sustained as a member of the Second Quorum of the Seventy of The Church of Jesus Christ of Latter-day Saints on March 31, 1990. On April 4, 1993 he was called to the First Quorum of the Seventy.  He was granted emeritus status in October of 2009.  He also served as president of the Idaho Area, having previously served as second counselor in the North America Central Area, as president of the Mexico North Area, as president and counselor in the North America Southwest Area, and as president of the South America South Area of the Church. Additionally, he served the Church in the missionary department.
Previous to his calling as a General Authority he served in the Church as president of the Colombia Cali Mission, as a regional representative, stake president, and bishop
He attended Ricks College and graduated from Brigham Young University. A successful independent farmer and potato shipper, he has served on a hospital board and in several farm associations in Idaho.
Elder Mickelsen is married to Jeanine Andersen Mickelsen of Sterling, Idaho, and they are the parents of nine children.

Decisiveness in the Face of Uncertainty: The Basis of Progress