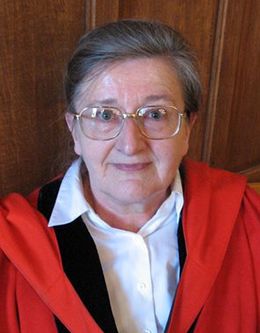 Margaret Barker is Cambridge educated, an Old Testament scholar, and a Methodist preacher. She has published eight important books reconstructing pre-exilic Israelite religion using ancient texts that pre­serve fragments of the earlier reli­gion. She finds a recovery of the pre-exilic religion in the texts of 1st-century Christianity.
Barker has been recognized for her work by being elected president of the Society for Old Testament Study, a UK-based international association of Old Testament scholars. She made a deliberate choice of a non-academic career to maximize the time she could devote to her research and writing. Her main employment is in the ecumenical Christian education network in Derbyshire, where she lives, and in guest lecturing. She is also a tutor for Methodist preachers.
Barker’s historical discoveries have great interest for LDS readers. She has identified the central goal of ancient Israelite religion in the pre-exilic ritual by which men passed through the veil of the tem­ple into the presence of God to be welcomed as his sons. Further, the father god El Elyon and his son god Yahweh were understood to be working together to enable this result. Barker explains the lack of clarity on this central issue in the Old Testament as the result of a post-exilic editing of the texts. The people who had been in exile in Babylon, influenced by the ideals of the Deuteronomists, wanted to obscure their polytheistic origins in the advancement of a clear monotheism. Barker finds in the New Testament and related literatures evidence that Jesus’ teaching was rooted in the older religion.
Margaret Barker is married and has two children. She and her husband live in Borrowash, Derbyshire, England.

What Did Josiah Reform? The Earlier Religion of Israel