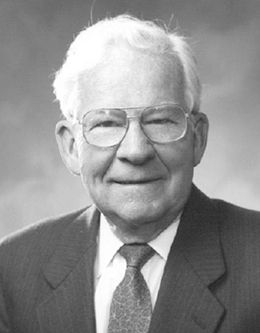 Though Marvin J. Ashton was known by many important titles throughout his life, most people remember him by the way he made them feel. Elder Ashton was witty, kind, and humble, and he was able to inspire people to become better while simultaneously making them feel worthwhile and loved as they were. His love of the Lord translated into a love of his fellowman, and he consecrated his many passions in life to the service of God.

Marvin Jeremy Ashton was born in Salt Lake City, Utah, on May 6, 1915. He was one of six children, who were blessed with faithful, loving parents. He grew up working on his family’s small produce farm and raising rabbits and pigeons. He learned not only how to work but also how to have fun. He loved sports, especially basketball, and developed a contagious sense of humor.

As he grew older, Marvin began working in his father’s hardware store in Sugarhouse, and he continued to work there as he put himself through college. He graduated with honors from the University of Utah School of Business, and despite a busy working and studying schedule, he was involved in extracurricular activities, including editing the sports section of the school newspaper. His passion for education stayed with him long after his own schooling. He later served on the University of Utah National Advisory Council and the Utah State Board of Regents. He was awarded an honorary doctorate of laws from his alma mater and another honorary doctorate in humanities from Brigham Young University. He also wrote and published several books.

Elder Ashton served a mission in Great Britain under mission president Hugh B. Brown. His missionary work sometimes took on unique faces as he dedicated his talents to the Lord. While on his mission, he wrote for and edited the Millennial Star, helping distribute an unprecedented number of copies. He was also captain of a basketball team that won the British national title and was a member of the team that won the European international championship—all while only practicing twice a week in the evening after the day’s missionary labors were done. A characteristically warm, friendly, and peacemaking man, Elder Ashton became friends with a prominent Methodist clergyman and was invited to lead the Methodist Boys’ Brigade, which he did for more than six months.

When he returned home from his mission, Marvin spent a year building a house for his soon-to-be bride, Norma Bernston. The Bernstons were a Norwegian family who were neighbors to the Ashtons, and Norma had been Marvin’s first formal date after he finished high school. She earned a degree in education and taught school for the year that Marvin worked on their house. They were married in 1940 in the Salt Lake Temple, and he said that “she [was] the best thing that ever happened to [him].” She served diligently in many Church callings, including on the General Relief Society Board. She was also Elder Ashton’s favorite tennis opponent. The Ashtons had four children—two sons and two daughters.

Elder Ashton continued to dedicate all of his talents to the Lord’s service. Professionally, he put his business education and experience to work as managing director of LDS Social Services (now LDS Family Services) and as chairman of the boards of ZCMI, Deseret Book Company, and the Polynesian Cultural Center. From 1957 to 1961 he served on the Utah State Senate. He was known for his willingness to put the welfare of the state over party politics and thus gained the high respect of the leader of the opposing political party.

During his time in the senate, from 1958 to 1960, Elder Ashton also served as assistant to the general superintendent of the Young Men’s Mutual Improvement Association. He became involved with the Boy Scouts of America organization and earned the Silver Beaver, Silver Antelope, and Distinguished Eagle awards. He also employed his love of sports as he directed a Church-wide basketball championship and expanded the Church athletic program for the youth. He loved and related to the youth of the Church and inspired many through his caring leadership.

In 1969, Elder Ashton was called to assist the Quorum of the Twelve, and two years later he was ordained a member of that Quorum. He served in that capacity for twenty years before his death in 1994. During those years he spoke many times at BYU. His insights about virtues such as patience, gratitude, integrity, and faith are powerful because of the sincerity of his testimony and the consistency of his example.

“Know He Is There”

Teaching, Mentoring, and Things of the Spirit

“And in Everything Give Thanks”

A Still Voice of Perfect Mildness

“He Loveth That Which Is Right”

Lessons from the Master

What Is Your Personal Ranking?

It’s No Fun Being Poor

What Shall We Do Then?

Patience Is a Great Power