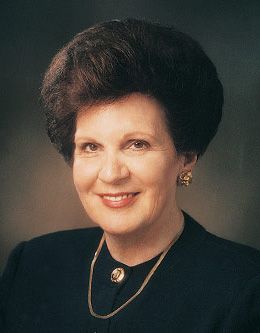 Mary Ellen W. Smoot, the fifth of six daughters, was born in Ogden, Utah, and raised in Clearfield, Utah. She attended Utah State University.
Sister Smoot has served on the board of the South Davis Community Hospital, was an orga­nizer of the Centerville (Utah) Historical Society, was on the board of the local chapter of the United Way, and wrote a history of Centerville. She was honored as out­standing citizen of Centerville by the Centerville Rotarians Service Club. For a few years she wrote the Centerville local and governmental news for the Davis County Clipper.
Sister Smoot’s Church service includes callings as Relief Society president, a member of the editorial board of The Friend magazine for a year and a half, a member of the Church Curriculum Writing Committee for five years, and as a director of Church Hosting.
In 1983 her husband was called to serve as mission president for the Ohio Columbus Mission. After one year he was called to open the Ohio Akron Mission. With Kirtland and Hiram as part of this mission, the Smoots were part of the activities surrounding these historical sites, including the dedication of the Newel K. Whitney Store in Kirtland.
She is married to Stanley M. Smoot, and they are the parents of seven children.

The Superhighway of Life