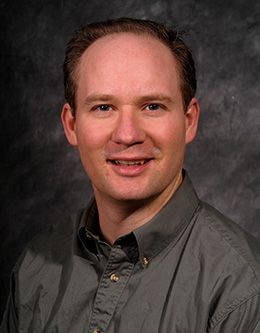 Michael F. Whiting was born in Brazil and raised in Provo, Utah. He received his BS in zoology from BYU in 1990 and PhD from Cornell University in 1995. A member of the Department of Zoology fac­ulty at BYU since 1997, he is cur­rently an associate professor in the Department of Integrative Biology. He is also director of the BYU DNA Sequencing Center and asso­ciate curator of the arthropods collection in the Monte L. Bean Life Science Museum.
Dr. Whiting’s research focuses on using DNA and anatomical information to elucidate patterns of evolution among the major insect groups. Current research is aimed at establishing the Insect Tree of Life. Sixty of his publications have appeared in major scientific jour­nals, including Nature, Evolution, and Systematic Biology, and he is the author of over 100 research pre­sentations at scientific meetings. He has served on review panels for the National Science Foundation and currently serves on the editorial board of three scientific journals.
Dr. Whiting has received the CAREER award from the National Science Foundation, the Ernst Mayr Award from the Society of Systematic Biologists, the Presidential Award from the Entomological Society of America, and the Young Investigator Award from BYU.

Charles Darwin and the Tree of Life: Some Assembly Required