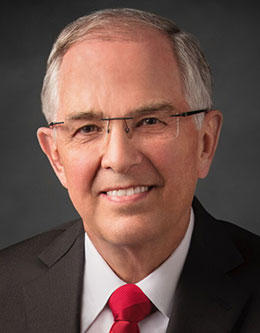 Born August 9, 1951, in Logan, Utah, Neil Linden Andersen’s family moved to Pocatello, Idaho, when he was five years old. There he grew up on a dairy farm, learning the value of hard work. His family traveled ninety miles each week to the nearest meeting house of The Church of Jesus Christ of Latter-day Saints, setting a precedent for his dedication to the gospel. When he came to Brigham Young University, he took a 4:00 a.m. custodial job to help him save up for his mission. Neil L. Andersen had always wanted to serve a mission, but when his call to serve in France came, he doubted whether he was qualified. He humbly asked the Lord, “How can I serve when I know so little?” The response was clear, “You don’t know everything, but you know enough.”1 That experience laid a foundation of faith that served Elder Andersen on his mission and long afterward. He shared the experience in a general conference talk, which has become a hallmark for Latter-day Saints struggling with faith during times of uncertainty.

When Neil returned to BYU, he was elected as the student body vice-president, and while campaigning for office, he met Kathy Sue Williams. They were married in 1975 in the Salt Lake Temple. He recalls, “Once I married her, the standards in my life went way up . . . she has a pure and disciplined faith.”2 Pure and disciplined faith marked their life together. After Elder Andersen graduated from BYU as a Hinckley scholar, the Andersens moved to Boston—the first of many moves. Elder Andersen then earned an MBA from Harvard University and had their first child, after which they moved to Florida, where Kathy had grown up. Planning to settle there, Neil L. Andersen began business ventures in advertising, real estate development, and health care. It was there that his other three children were born.

Then, while Elder Andersen was serving in the stake presidency, he was called to preside over the France Bordeaux Mission. He accepted, and the Andersen family moved to France for three years. In that time, with much faith and effort on the part of Elder Andersen, the missionaries, and the French members, the first stake was created in Bordeaux. Years later, and after being called into the Quorum of the Twelve, Elder Andersen was able to return to France for the dedication of the Paris, France Temple.

Right after the Andersens returned to Florida, Elder Andersen was called to be the stake president in the Tampa Stake. However, he only filled that position for a year before being called as a General Authority for the Church in 1993 at age 41. Moving to Salt Lake City was one of eight moves the family made for Church assignments. In Salt Lake City, Elder Andersen served as the Executive Director of the Church Audiovisual Department, where he oversaw the production of The Testaments: One Fold and One Shepherd, the launching of Mormon.org, and the construction of the broadcasting facilities in the Conference Center.

Other significant moves for the Andersen family included southern Brazil, as part of the Area Presidency (and where Kathy worked hard to finish her degree, completing eighteen credit hours in Portuguese), western Europe as an Area President, and Mexico to supervise the Church’s work there and in Central America. Elder Andersen worked diligently to be able to teach the gospel in the languages of the people he served. He now speaks French, Portuguese, and Spanish. He acknowledges the goodness and sacrifices of his children and the “uncompromising loyalty” of his wife through so much change. He has seen the Lord’s blessings in their family for their service.

His family reports that Elder Andersen never let his demanding Church service hinder his personal relationships with them. He made time for monthly individual breakfast outings with each of his four children, as well as time to play basketball, listen, and give good advice. They all still call him “Daddy.” They are also grateful for the example he set in his deep respect for their mother. He expressed gratitude for even the little things she did, opened the door for her, and often offered to help with chores.

Elder Neil L. Andersen was serving as the senior president in the Presidency of the Seventy when he was called in 2009 to the Quorum of the Twelve Apostles. With that increased authority and daunting responsibility came the reminder that although he didn’t know everything, he knew enough. His firm testimony of the Savior Jesus Christ and His gospel provides all he needs to know to bless and uplift members worldwide.

Allowing Your Faith in Jesus Christ to Guide Your Life

Time for the Savior at Christmas

A Holier Approach to Ministering

A Compensatory Spiritual Power for the Righteous

Preparing for Your Spiritual Destiny

Hold Fast to the Words of the Prophets

Seeing Through the Generations