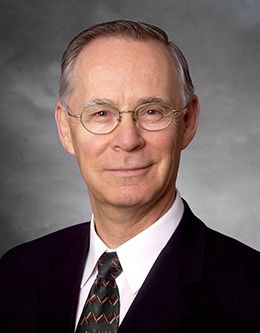 Paul F. Eastman, a former associate professor of mechanical engineer­ing at BYU, received his PhD in ceramic engineering from the University of Utah in 1965. He joined the DuPont Company that year and concluded a 20-year career of prod­uct and process development with an early retirement in 1985. Professor Eastman joined the Mechanical Engineering Department at BYU in the fall of 1985. He taught and researched materials science and served as chair and co-chair of the Advanced Composite Manufacturing and Engineering Center. He taught extensively outside of his depart­ment, including teaching Book of Mormon, Honors history of civilization, Honors natural science classes, and EST 200, a social science GE class relating technology and society.  He retired from BYU in 2008 after 22 years of service there.
Professor Eastman was born in Tooele, Utah, and married Marge Jensen of Moore, Idaho. They have three children. He served as a stake president for 10 years in Ohio and recently com­pleted nearly eight years as an ordi­nance worker in the Provo Temple. He has also served as bishop of his home ward.

The Moral Dilemma of Doing Good