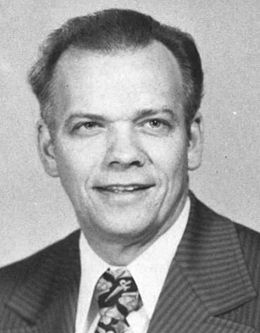 Paul Harold Dunn was born on April 24, 1924, in Provo, Utah. He was an active boy who loved sports and dreamed of being a professional athlete. He signed a contract with a minor league baseball team after high school as a pitcher, but his brief baseball career was interrupted by military service during World War II.

When he returned home from the military and finished in baseball, Paul H. Dunn began a lengthy educational career. He earned a bachelor’s degree from Chapman College in 1953, followed by a master’s and a doctorate degree in educational administration from the University of Southern California.

Paul H. Dunn married Jeanne Alice Cheverton in 1946 and they raised three daughters together. His love for his wife and daughters has been paramount in his life, and he was named Utah’s Father of the Year in 1972.

After teaching seminary in Los Angeles since 1952 and serving for several years as an institute coordinator for the Church, Paul H. Dunn was called as a General Authority in 1964. He served in the First Council of the Seventy, in which position he presided over the New England mission from 1968 to 1971. He was later called to the First Quorum of the Seventy in 1976 and served in the Presidency of the Seventy from 1976 to 1980.

Elder Dunn was granted Emeritus status for health reasons in 1989. During that time he was also reproached in the media for exaggerating or even sometimes fabricating stories about his baseball career and military service. Acknowledging that he did combine elements of personal stories and also embellished them, in 1991 Elder Dunn wrote a letter to members of the Church, in which he apologized for his misconduct and acknowledged willingness to submit to Church censure. He finished the letter by expressing his “determination so to live as to bring added respect to the cause I deeply love, and honor to the Lord who is my Redeemer.”

Elder Dunn passed away January 9, 1998 of cardiac arrest while recovering from back surgery at age of 73.

Paul H. Dunn was a dynamic teacher, especially of youth. He often offered his testimony of the great potential of individuals who believe in God and their own divine nature and who work hard to accomplish great things.

Seek and Ye Shall Find

Put on Your Spiritual Clothes

The Game of Life

The Ships of Life