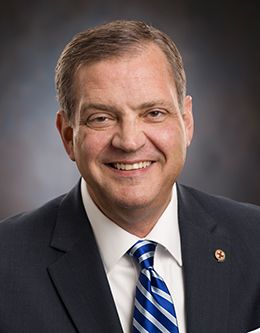 Mohler presides over the flagship school of the Southern Baptist Convention and one of the largest seminaries in the world. He has been recognized by such influential publications as Time and Christianity Today as a leader among American evangelicals. Time.com called him the “reigning intellectual of the evangelical movement in the U.S.” Called “an articulate voice for conservative Christianity at large” by The Chicago Tribune, Dr. Mohler’s mission is to address contemporary issues from a consistent and explicit Christian worldview.

Having served as pastor and staff minister of several Southern Baptist churches, Mohler is a theologian and an ordained minister. He came to the presidency of Southern Seminary from service as editor of The Christian Index, the oldest of the state papers serving the Southern Baptist Convention.

A native of Lakeland, Fla., Mohler was a Faculty Scholar at Florida Atlantic University before receiving his Bachelor of Arts degree from Samford University in Birmingham, Ala. He holds a master of divinity degree and the doctor of philosophy in systematic and historical theology from Southern Seminary. Mohler has pursued additional study at the St. Meinrad School of Theology and has researched at University of Oxford.

Mohler is listed in “Who’s Who in America” and other biographical reference works and serves on the boards of several organizations including Focus on the Family. He is a member of the Council for Biblical Manhood and Womanhood and serves as a council member for The Gospel Coalition.

Strengthen the Things That Remain