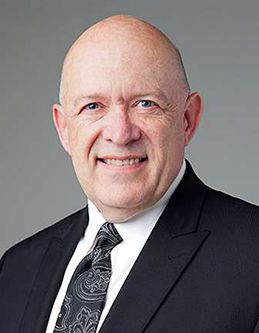 Randall W. Boothe is an associate professor in the BYU School of Music. He has served for 25 years as artistic director of the Young Ambassadors. His perfor­mance tours for BYU and BYU–Hawaii have taken him to 40 coun­tries on 61 tours over the past 30 years. He is a consultant with Walt Disney Productions, the Polynesian Cultural Center, and Jackson Hole Playhouse. In 1997 he directed the Sesquicentennial Spectacular in Cougar Stadium with a cast of 6,000 participants, and last year he served as co-direc­tor of Light of the World, the 2002 Winter Games Spectacular pre­sented in the LDS Conference Center during the Olympics.
Brother Boothe has served as second counselor in a stake presidency, on a stake high coun­cil, as a bishop, elder’s quorum president, varsity team coach, Primary teacher, choir director, organist, gospel doctrine teacher, and as a full-time missionary in the Germany Frankfurt Mission from 1970 to 1972.
He is married to the former Susan Johnson of Spanish Fork, Utah, and they have three children.