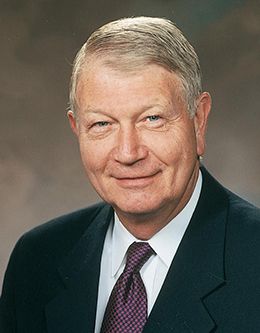 Born in Preston, Idaho in 1936, Bishop Richard C. Edgley spent his summers working on a ranch where few of his peers shared his standards. He remembers being lonely during that time of his life, but reflects upon those experiences as great blessings—he was able to spend time studying the scriptures and coming to know Christ. It was during this time that he developed a testimony of the gospel.

After serving an LDS mission in the eastern United States, Bishop Edgley graduated from Brigham Young University. He then received his master’s degree in business administration from Indiana University. Bishop Edgley went to work for General Mills, advancing within the company until he held the position of vice president. He worked with the company for 19 years, moving to Toronto, Boston, and Minneapolis with his wife, Pauline, and their six children. His time with General Mills was ended by a call to serve as managing director of the Church’s Finance and Records Department in Salt Lake City.

After twelve years of service in the Finance and Records Department, Bishop Edgley was called in 1992 to the Presiding Bishopric of The Church of Jesus Christ of Latter-day Saints. He served in the Bishopric as first and then second counselor until 2012, when he was granted emeritus status. His church service also included being a bishop in Boston, a counselor in the Minneapolis Minnesota Stake presidency, and president of the Centerville Utah North Stake.

Bishop Edgley has spoken several times at BYU. Each address carries a unique message that invites listeners to envision themselves in the gospel, whether it be through coming to better know the life of Joseph Smith or through realizing their divine potential as sons and daughters of God. In his devotional address entitled “Becoming You,” he issues a reminder of Heavenly Father’s belief in His children and the subsequent need to believe in ourselves.

Faith, Hope, and You