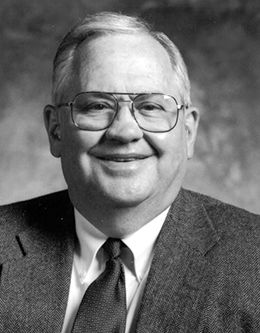 By 1963, Dr. Richard H. Cracroft earned his bachelor’s and master’s degrees in English from the University of Utah. He joined the BYU English Department faculty in 1963. In 1969, Dr. Cracroft earned his PhD in English and American literature from the University of Wisconsin–Madison. He then served two terms as department chair from 1975 to 1980 and two terms as dean of the College of Humanities from 1981 to 1986. Dr. Cracroft chaired American Studies from 1989 to 1994. Beginning in 1994, Dr. Cracroft was director of the Center for the Study of Christian Values in Literature and served as editor of Literature and Belief, a national, nondenominational scholarly journal combining religious faith and literary scholarship, for several years.

A prolific author, he wrote Washington Irving: The Western Works and coedited A Believing People: The Literature of the Latter-day Saints, 22 Young Mormon Writers, and Voices from the Past, a collection of Mormon journals and diaries. Dr. Cracroft co-compiled/edited the Provo Patriotic Reader, and he has published in numerous professional journals on various literary figures and genres.

Dr. Cracroft was a major force in establishing Mormon literature as an area for literary study. He assisted in establishing the Association for Mormon Letters, helped edit Western American Literature and other journals, and chaired the advisory board of BYU Studies.

He served in numerous Church callings, including as a bishop, a stake president, an MTC branch president, and as president of the Zurich Switzerland Mission. Dr. Cracroft passed away in September of 2012.

Divine Designs: Tracing the Lord’s “Pattern in All Things”

“We’ll Sing and We’ll Shout”: A Mantic Celebration of the Holy Spirit

A Time for Laughter

Our Trek Through the Wilderness