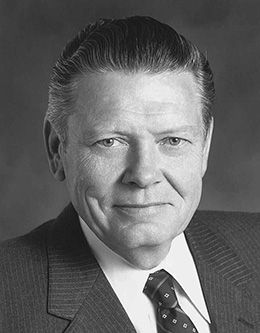 Although he was born and raised in the United States, Robert E. Wells spent most of his adult life in Latin America. Elder Wells served for a time in the United States Navy, and, after being honorably released, he attended Brigham Young University and received a degree in accounting. He then served as a missionary in Argentina, where he learned Spanish—a language that he would use both professionally and in Church callings throughout the rest of his life.

Shortly after his return to the United States, Elder Wells married Meryl Leavitt. Together they left for South America, where Elder Wells began his career with First National City Bank. As his work took the couple to Paraguay, Ecuador, Argentina, Brazil, and Uruguay, it became clear that this job was, in part, a fulfillment of his patriarchal blessing, which boldly stated that his life would include service “among the nations of the world.”

Elder Well’s wife Meryl passed away in 1960 in Argentina when an airplane she was piloting was involved in an accident. Two years after this tragic event, Elder Wells began to feel that it was time for him to remarry. He was prompted that he should look for and marry a woman who had been prepared for service as a mission president’s wife, and he also received the specific impression that he needed to return to the United States to find her. When he met Helen Walser, he knew that she was the woman he was meant to marry. Only seven days after they met—and after receiving a strong spiritual confirmation that the decision was right—Elder Wells proposed. They were married thirty days later.

In 1968 Elder Wells and Helen returned to Latin America, where Elder Wells served as president of the Mexico Monterrey Mission. Following his release in 1971, Elder Wells began work at the Church’s Central Purchasing Department. He remained there until 1976, by which time he was the head of the Purchasing Department. Elder Wells was then called to be an area representative for Chile, Argentina, Paraguay, and Uruguay, moving his family once again to South America. That same year he was called to serve in the First Quorum of the Seventy, a position which he filled until 1997 when he was granted emeritus status. Following his release, he and his wife served as president and matron of the Santiago Chile Temple from 1998 to 2001.

Elder Wells is the father of seven children, including Sharlene Wells, who was Miss America in the year 1985. In his addresses at BYU, Robert E. Wells encourages students to become the people they are meant to be by focusing on Christ’s teachings and being accountable for their decisions.

Whatever We Ought to Be, We Better Be Becoming

“In God We Trust”