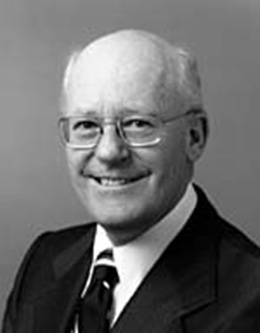 Robert L. Backman was born March 22, 1922, in Salt Lake City, Utah, but spent much of his youth in South Africa where his father served as president of the Church’s South African Mission. Having attended a boys-only school in South Africa, Brother Backman recalls being terribly shy when he returned to the United States. During his last year of high school, he found social situations agonizingly uncomfortable. It wasn’t until Brother Backman received his mission call that his life and personality were transformed as he found purpose in serving God’s children in the Northern States Mission.

Brother Backman was stationed in the Philippines during World War II as a member of the U.S. Army. He has recalled fondly one particular Eastertime spent in the army when he organized an Easter service in a combat zone east of Manila. Though he wasn’t sure anyone would want to attend, over fifty men gathered together inside of a bombed building to administer and partake of the sacrament. Despite their chaotic surroundings, all in attendance felt the Spirit abundantly.

Upon returning home from the Philippines, Brother Backman married Virginia Pickett, whom he had known in high school. The confidence that he had gained on his mission gave him the courage to ask her on a date, and they soon fell in love. The couple eventually had seven children.

Early in their marriage, with two children, a wife, and dreams of a larger family to provide for, Brother Backman enrolled in law school at the University of Utah, graduating in 1949. He practiced law for several years before receiving the call in 1996 to serve as president of the Northwestern States Mission with his wife. He also served as a temple sealer, a regional representative, and a president of the Aaronic Priesthood–MIA before it was placed under supervision of the Presiding Bishopric. Brother Backman involved himself in public affairs as well, and he worked as a member of the Utah House of Representatives for two terms.

Brother Backman has delivered multiple addresses at Brigham Young University, focusing on the topics of education, integrity, and preparation for the future. In his address “Education: Molding Character,” he teaches students that “developing character in harmony with the purpose of life is another great aim of education, and the path to happiness.”

“To Thine Own Self Be True”

Looking to the Future