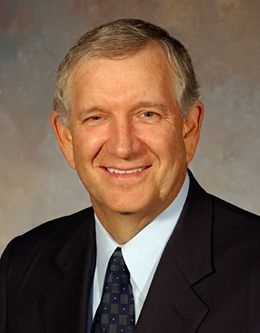 Dr. Robert B. Sloan Jr. became the 12th president of Baylor University on June 1, 1995, leaving his position as founding dean of Baylor’s George W. Truett Theological Seminary.  He served in this position until 2005.
He attended Baylor from 1967 to 1970, graduating early with a bachelor of arts degree. He then attended Princeton Theological Seminary, where he earned his master of divinity degree in 1973. He conducted post-baccalaureate research in church history at the University of Bristol, England, from 1973 to 1974 and earned a doctor of the­ology degree in 1978 from the University of Basel, Switzerland.
Sloan joined the faculty of Baylor’s Department of Religion in 1983 after holding teaching positions at Southwestern Baptist Theological Seminary in Fort Worth and at Hardin-Simmons University in Abilene. In 1990 he became the first holder of the George W. Truett Chair in Evangelism at Baylor, and in 1993 he was appointed dean of Truett Seminary.
Sloan has held positions as pastor or interim pastor of more than 20 churches in Texas, Oklahoma, New Jersey, and in Germany. He has authored two books, assisted with the editing of several books, and published more than 50 articles and chapters for scholarly or ecumenical journals and publications.
He is married to the former Sue Collier of Cisco, Texas. They are members of the First Baptist Church of Waco and the par­ents of seven children.