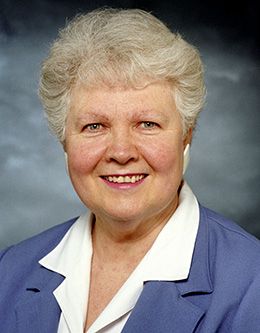 Sister Sally M. Todd served as a professor at BYU and faculty coordinator of the BYU Gifted Education Program. She was also cochair of the BYU–Public School Partnership Gifted/Talented Task Force.
Professor Todd served as a United States delegate to the World Council on Gifted Children, was on the board of directors for the National Association for Gifted Children, and served as an advisor to the Utah Association for Gifted Children. She was also presi­dent of BYU’s chapter of the national honor society Phi Kappa Phi.
Professor Todd is coauthor of You and the Gifted Child and has numerous other publications to her credit. She was involved in international education and traveled as an educational consultant in Canada, Hong Kong, and Australia.
She has held ward and stake positions in the Primary, Young Women, and Relief Society and has taught seminary in the Church Educational System. Sister Todd  is married to Henry S. Todd, professor emeritus of computer science.