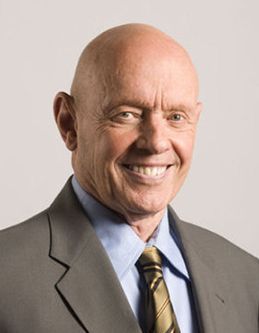 Dr. Stephen R. Covey is perhaps best known as the author of The Seven Habits of Highly Effective People, which has been ranked as an  international bestseller by the New York Times and has sold more than twenty-five million copies in thirty-eight languages throughout the world. The book’s message has created lasting impact, leading it to be named by Forbes in 2002 as one of the top ten most influential management books ever written.

Stephen R. Covey was born in Salt Lake City, Utah, on October 24, 1932. He was a practicing member of The Church of Jesus Christ of Latter-day Saints throughout his life and served a two-year mission in England for the LDS Church when he was a young man. He later served as the first president of the Irish Mission in 1962 and has filled assignments on the MIA General Board and several other Church committees.

Dr. Covey earned his undergraduate degree from the University of Utah, received his MBA from Harvard, and completed his doctorate at Brigham Young University. He and his wife, Sandra, lived with their family in Provo, Utah, where he worked as a professor of business management and organizational behavior and as assistant to the president at Brigham Young University prior to the publication of The Seven Habits of Highly Effective People.

Dr. Covey was the recipient of many awards, including the Thomas More College Medallion, International Entrepreneur of the Year, and the Fatherhood Award from the National Fatherhood Initiative. He has received twelve honorary doctorate degrees and has been recognized as one of Time magazine’s twenty-five most influential Americans. His other published works include The Seven Habits of Highly Effective Families, The Eighth Habit, and First Things First, which was coauthored with A. Roger and Rebecca R. Merrill.

An avid cyclist, Dr. Covey loved biking in Rock Canyon Park in Provo. In 2012, he was involved in an accident where he lost control of his bike, fell, and, although he was wearing a helmet, hit his head on the pavement. He suffered from cracked ribs and a partially collapsed lung. He passed away at the age of seventy-nine from complications relating to this bike accident. He was the father of nine and grandfather of fifty-two.

In his address at BYU, Dr. Covey stresses the importance of learning to listen to one’s conscience. This is a lesser-known way that the Holy Ghost communicates what is right and what is wrong, and one of the ways that anyone can receive guidance from God. This message and the messages found in his books continue to inspire and educate countless individuals around the globe.