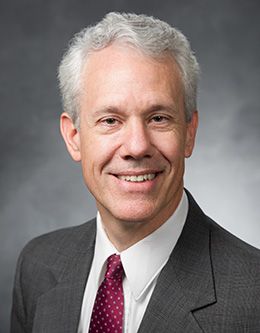 Sterling C. Hilton is a BYU associate professor and chair of the Department of Educational Leadership and Foundations in the McKay School of Education. He earned his bachelor’s degree in economics from BYU as well as two master’s degrees: one in political science and one in statistics. Several years before earning a PhD in biostatistics from Johns Hopkins University, he worked as a young intern at the U.S. consulate in Bilbao, Spain, preparing for a career in the Foreign Service. However, his plans changed when he realized his desires and goals lay elsewhere.

Hilton joined BYU as a statistics professor in 1996 and in 2003 joined the McKay School of Education. He taught and served on the doctoral committee until he became the department chair in 2009. In addition to his role as the department chair, he teaches and conducts research in quantitative design and analysis.

His research efforts are guided by a strong commitment to improve students’ understanding of mathematics. This commitment has led him to study the teaching of mathematics, professional development models and curriculum for expanding the capacity of teachers and educational leaders, and educational systems, structures, and leadership that promote, achieve, and sustain systemic improvements. He works collaboratively with colleagues and partners with several school districts in conducting this research. For the past ten years these research efforts have been funded by Math Science Partnership grants from the U.S. Department of Education.

In addition to spending time with his family, Hilton is an avid runner. He is currently serving as Sunday School president and has been Young Men president three times. He and his wife, Heidi, are the parents of four children.

His Burden Is Light