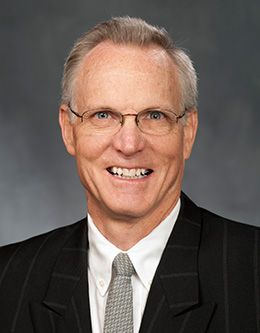 Thomas H. Morris was born and raised in St. Paul, Minnesota. He came west to BYU to pitch for the Cougar baseball team. He discovered geology as he traveled with the team throughout the West and Hawaii.

After a short minor league stint with the Chicago Cubs Baseball Club, Tom returned to BYU to complete his bachelor of science in geology. He then completed his MS and PhD in geology at the University of Wisconsin–Madison. Tom’s graduate research involved aspects of sedimentology and paleoceanography of the Arctic Ocean. He then spent four years as an exploration geologist for Exxon in the Gulf Coast. Tom returned to BYU as an assistant professor in 1990. He has published more than 30 papers on the sedimentary rocks of Utah’s Colorado Plateau. Tom has also served as a coeditor of several professional volumes on these rocks and has recently coauthored a popular book about the geology of Utah’s national parks. Tom finds great satisfaction in the development and success of his students.

Tom and his wife, Lisa, have three sons and have recently been blessed with their first grandchild.