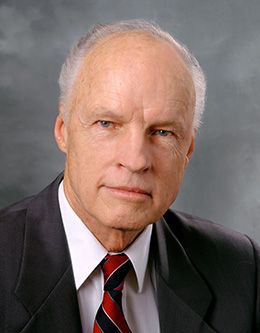 Truman G. Madsen is known throughout Latter-day Saint and secular spheres as an earnest and respected writer, orator, scholar, and philosopher. As a tireless supporter of the restored gospel of Jesus Christ, his works have inspired readers and listeners for decades.

Truman Grant Madsen was born December 13, 1926, in Salt Lake City, Utah. Named in honor of Truman O. Angell, the architect of the Salt Lake Temple, and President Heber J. Grant, his maternal grandfather, Madsen was reared with a strong foundation of faith. But that did not mean he was perfect; in 1946, Madsen spent 17 days in the Salt Lake County Jail for traffic violations including running a red light, speeding, and driving on a suspended license. Luckily his run-in with the law was short-lived, for following his release from jail Madsen was ordained an elder, received his endowment in the Salt Lake Temple, and left for Boston to serve as a missionary in New England.

On returning home from his mission, Madsen pursued a bachelor’s degree in speech and a master’s degree in philosophy from the University of Utah. He applied to Harvard’s PhD program but was not accepted. He then applied to be a Rhodes Scholar but was once again not selected. Though it would have been easy to give up, Madsen continued to apply himself and changed his course of action to study graduate-level philosophy at the University of Southern California. The day before he was sealed to his wife, Ann Nicholls Madsen, in the Salt Lake Temple, he received an acceptance letter from Harvard’s philosophy PhD program.

While Madsen was at Harvard, he decided to “give religion equal time” in his life. Despite the demands of school and family, he made it a priority to study the revelations of Joseph Smith just as deeply as he studied the discipline of philosophy. This keen interest lead to a lifelong passion of studying the Prophet Joseph’s life. Madsen read every piece of material he could find on the Prophet, especially documents written by those who had personally interacted with him. Madsen shared his knowledge and testimony in his popular lecture series Joseph Smith the Prophet, which was delivered in 1978 at BYU Campus Education Week. Copies have been circulated worldwide and still remain popular to this day. Forty years later, these lectures were made available on speeches.byu.edu and through the BYU Speeches: Joseph Smith podcast.

Madsen’s ties to the Northeast, which began with his missionary service in New England, grew stronger as he was called to serve as a counselor in the Atlantic District presidency in Boston. Those ties were further strengthened again in 1962 as he was called by President David O. McKay to preside over the New England Mission—the very mission he had served in as a young man. He was only 35 years old. Madsen’s other Church activity included serving as a member of the Sunday school general board, counselor in the Israel District presidency, president of BYU’s 5th Stake, and patriarch of the Provo Utah Sharon East Stake.

Madsen was a professor of religion and philosophy at Brigham Young University for 37 years. During this time he paved the way for groundbreaking interfaith work around the world as the Richard L. Evans Chair in Judeo-Christian Studies from 1973 to 1993. He was a Kennedy Center Research Fellow and resident scholar and director at the Jerusalem Center for Near Eastern Studies. He was also a guest professor at Northern University in Boston, University of Haifa in Israel, and the Graduate Theological Union in Berkeley; and he lectured at over 100 American and 50 international universities. In 1966 Madsen was awarded BYU’s most prestigious award, the Karl G. Maser Distinguished Faculty Award.

Writing on the topic of religion was one of Madsen’s lifelong passions. A gifted author, Madsen’s bibliography includes many books such as Christ and the Inner Life; Defender of the Faith: The B.H. Roberts Story; The Temple: Where Heaven Meets Earth; Joseph Smith, the Prophet; and The Radiant Life. He also produced several documentary videos and was an editor and contributor to the five-volume Encyclopedia of Mormonism.

Balance was one of the principles that defined Madsen’s life. When he diagnosed with bone cancer in his later years, he remarked that while he had spent time learning intellectually about suffering, he was now given the opportunity to learn about it in his very bones. After a yearlong battle with that cancer, Madsen passed away in his home on May 28, 2009, at the age of 82. His legacy of faith and scholarship lives on through his words, which continue to touch the lives of many.

On How We Know

Souls Aflame: The Prayer Heritage of the Latter-day Saints

Joseph Smith Lecture 1: The First Vision and Its Aftermath

The Highest in Us

The Commanding Image of Christ