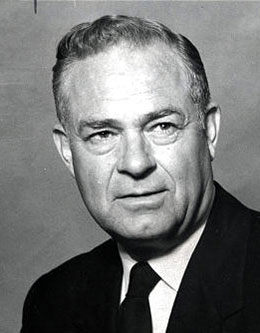 William Grant Bangerter was born on June 8, 1918 in the small town of Granger, Utah. He graduated from Cyprus High School. As a young man, he served a mission in Brazil and spent four years serving in the United States Army as an Air Force pilot during World War II.

After studying for a time at Brigham Young University, where he created fond memories of attending BYU devotionals, W. Grant Bangerter attended the University of Utah, where he graduated with honors. He also completed graduate work in history.

In 1944, W. Grant Bangerter married Mildred Lee Schwantes. They had four children together before she passed away of leukemia in 1953. A year later, Bangerter married Geraldine Hamblin, and together they had seven children, making him the father of eleven. One of the daughters of W. Grant Bangerter and Geraldine Hamblin is Julie B. Beck, who served as the General Relief Society president from 2007 to 2012. His children remember him as a soft-spoken and deliberate man who loved spending time outdoors camping, fishing, and hunting with his family.

A skilled carpenter, W. Grant Bangerter began his post-college career as a building contractor. He also loved farming and kept a farm throughout his life; even as a general authority seventy, he was known to come home, change out of his suit, and milk the cows. He also served as a bishop and stake president in Granger.

From 1958 to 1963, W. Grant Bangerter returned to Brazil to preside over the Brazilian mission; he later served as the first president of the Portugal Lisbon mission in 1974. He was called in 1975 as a general authority seventy, serving for a year as an assistant to the Quorum of the Twelve Apostles before joining the First Quorum of the Seventy. In that capacity, he served in the North American Northeast Area Presidency, as the executive director of the Temple Department, as the managing director of Genealogical Department, and for six years in the Presidency of the Seventy.

W. Grant Bangerter also sought opportunities to contribute in the community. He was the chairman of the Pioneer Welfare Region, a member of the executive committee of the board of trustees at LDS Hospital, and the chairman of the Magna and Granger seminary boards.

When he was granted emeritus status in 1989, W. Grant Bangerter continued to find meaningful ways to serve. He was the president of the Jordan River Utah Temple, worked in the Mount Timpanogos Utah Temple, and served as a stake patriarch. He passed away on April 18, 2010. In his BYU devotionals, he shares his testimony of the power of the gospel to change our lives and relationships for the better.

The Light of Truth

The Gospel Has Been Restored