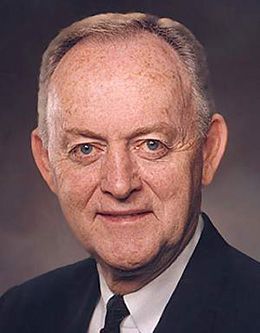 Elder W. Rolfe Kerr grew up in Tremonton, Utah on a beef ranch. It was there that he learned the value of hard work and persistence. His father allowed the boys to earn money from the difficult work they accomplished, and Elder Kerr took this endeavor seriously. Working hard and hiring himself out to help harvest other farmers’ fields, he profited enough to pay for his mission and his college education.

He obtained his higher education at Utah State University where he received his bachelor’s and master’s degrees. He then received his doctoral degree at the University of Utah. Elder Kerr is well-known for his easygoing and personable attitude. As an undergraduate at USU, he was both the quarterback of the football team and the student body president. His impact on the Utah education system has been dramatic. From serving as commissioner of the Utah System of Higher Education to being the commissioner of education for The Church of Jesus Christ of Latter-day Saints, Elder Kerr has always had his foot in the door of education, always working to manage and change things as needed for the better. He also served as executive vice president of Brigham Young University, the president of Dixie College, assistant to the president at Utah State University, associate dean of students at the University of Utah, dean of men at Weber State University, and coordinator of student government at Utah State University.

Elder Kerr was called as a General Authority in 1996. Prior to this appointment, he was serving as president of the Texas Dallas Mission. His time serving as a member of the First Quorum of the Seventy has allowed him to preside over areas across the world, including the Europe West and Europe North Areas, the North America Northwest Area, and the Utah South Area.

Elder Kerr and his wife Janeil have six children and several grandchildren.

Measuring Up to the Mission

“Withstanding Every Temptation of the Devil”

Thanks for the Things that Count