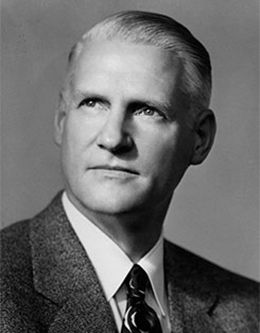 William Edwin Berrett, who preferred to simply be called “Ed” by those who knew him, was born June 2, 1902 and grew up on his family’s farm in Midvale, Utah. There he attended Jordan High School, where he played football and was involved in debate. He later competed for five years on the University of Utah debate team. William E. Berrett received his undergraduate degree in 1924, graduating with high honors.

Brother Berrett began his career by teaching seminary in various cities and schools across Utah and Idaho, eventually becoming the principal of the LDS seminary program in Roosevelt, Utah. He then returned to the University of Utah to earn a law degree, which he received in 1933. While studying law, he also completed six years of graduate studies at Brigham Young University. He would one day be given the Merit of Honor Award by the University of Utah Alumni Association and would be awarded an honorary doctor of law degree from BYU.

In 1926, William E. Berrett married Eleanore Louise Callister in the Salt Lake Temple. They had four children together. A few years after his law school graduation, he began writing textbooks for LDS schools and worked as an editor for Church Educational System curriculum development. His authorship became very influential; among his books are The Restored Church, a history of The Church of Jesus Christ of Latter-day Saints, and Readings in LDS Church History, which he co-compiled. Later in life, he worked on a major history of the Church Educational System, which eventually became A Miracle in Week-day Religious Education.

A member of the Utah State Bar beginning in 1937 and a member of the Federal Bar from 1946 to 1948, William E. Berrett served as an appointed special prosecutor for the Office of Price Administration for the Utah Division and as an assistant U.S. attorney in Alaska Territory. He then turned his attention to private practice in Salt Lake City, concurrently working on the editorial staff of Deseret News.

In 1947 William E. Berrett joined the BYU faculty as a professor of Church history. During his time at BYU, he helped to establish an ROTC unit on campus, for which the Air Force selected him to receive the Distinguished Service Award. He also worked with President Wilkinson to help recruit more faculty for the growing university. He was appointed vice president for both Brigham Young University and the Church Educational System until church education was reorganized, separating BYU from seminaries and institutes. Upon that reorganization, he was appointed head of seminaries, institutes, and all Church-run colleges apart from BYU. He was also named chairman of the Utah Committee on Children and Youth.

William E. Berrett’s Church service extended far beyond his employment. He was a member of the Deseret Sunday School Union General Board for nearly twenty years, a part of a stake presidency, and a patriarch for most of the final two decades of his life. He passed away on November 30, 1993. In his devotional address at BYU, he emphasizes the strength of character that allowed Joseph Smith to be God’s instrument in restoring and revealing important gospel truths. Berrett encourages all to strive for such character traits.