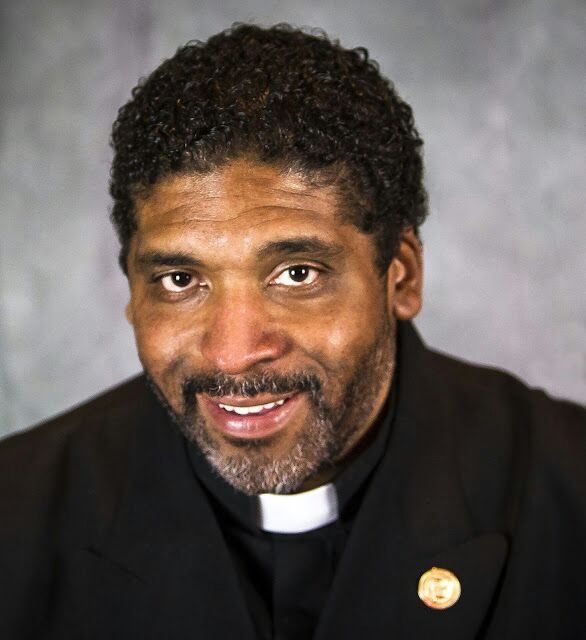 The Reverend Dr. William J. Barber II is a prominent social activist and Protestant minister. He was born on August 30, 1963, in Indianapolis, Indiana. When he was young, his family moved to Washington County, North Carolina, to assist in the desegregation of public schools there. Rev. Dr. Barber later attended North Carolina Central University, graduating cum laude with a bachelor’s degree in political science in 1985. He then went on to earn his master of divinity degree from Duke University in 1989. In 2003 Rev. Dr. Barber would return to school to obtain a doctor of ministry from Drew University with a concentration in public policy and pastoral care.

During his early college years, Rev. Dr. Barber became very involved in political activism. In 1984 he organized a march to support Jesse Jackson’s presidential campaign. At this march he met Rebecca McLean, whom he would marry three years later.

Rev. Dr. Barber is the president of Repairers of the Breach, an organization dedicated to a moral agenda of equal protection for all. Rev. Dr. Barber is also the founder of the Moral Movement, which began with a protest at the North Carolina General Assembly in 2013. During this time, he held weekly protests known as Moral Mondays. In 2018 Rev. Dr. Barber helped relaunch the Poor People’s Campaign, a movement begun by Martin Luther King Jr. fifty years earlier.

Rev. Dr. Barber served for over a decade on the National Association for the Advancement of Colored People (NAACP) Board of Directors and continues to serve as cochair of the Poor People’s Campaign. He is a widely sought-after speaker and has given hundreds of speeches around the world, including the homily for the 59th Inaugural Prayer Service for President Joe Biden. Rev. Dr. Barber’s publications include Revive Us Again: Vision and Action in Moral Organizing (2018) and We Are Called to Be a Movement (2020). Rev. Dr. Barber is the recipient of various awards, including the Puffin Award, the Franklin D. Roosevelt Four Freedoms Award, and a MacArthur Foundation Genius Award.