This Ministry of Mobility

Elder Ballard, President Nadauld, President Bateman, faculty, ladies, gentlemen, and, most important, distinguished graduates, thank you very much for inviting me to be part of this special day. Since I didn’t go to college, this honorary degree is especially meaningful to me. Thank you.

At a Senate hearing in Washington a few months ago, a senator and a cabinet secretary got into an argument over who was poorer growing up. Have you ever noticed that only when people become rich do they argue about how poor they were? Believe me, being poor is no great honor. In fact, what initially drove me in life was that I hated being poor.

It is really amazing how things work out. Because I have a big airplane that flies across the world at 35,000 feet, I came into contact with people who see the world by crawling on their stomachs and elbows.

I owe this blessing to The Church of Jesus Christ of Latter-day Saints. Although I’m not a member of the Church, about three years ago I was asked if I had room on my plane to drop off 15 tons of canned meat for refugees in Kosovo. Then the Church asked, “And is there any chance that you might have a little extra room to drop off some wheelchairs in Romania?”

I had never really thought about wheelchairs before. But after that trip I could think of little else.

When we dropped off the chairs, the doctor told me that disabled people in third world countries—such as many of the children in refugee camps whose legs have been blown off by land mines—are often just discarded and abandoned. Often families hide the disabled in the back room because they’re ashamed. They don’t even want their neighbors to know. Some of you on your missions overseas may have seen such things.

I’ve met people who have spent 25 years in a bed in a room with no windows. I met a girl who had spent the last 23 years lying flat on a mattress, looking at the ceiling without the ability to move or to be easily moved. Imagine not being able to see the outdoors unless someone carries you. No wonder so many dream that they’re birds.

I wish you could meet the people I’ve met. They have taught me to use the word love much more freely than I would have thought possible.

When we were in North Vietnam, we put an elderly lady in a wheelchair. She asked the interpreter if she could thank me. She came over and said, “I’m 85 years old, and I’ve wanted to die, but I have not been able to.”

I didn’t know what to say.

Then she moved closer and took my hands. She looked at me and smiled. Then she said, “But now I don’t want to die.”

A young Guatemalan man’s leg was swollen. He wanted to know if he could borrow a wheelchair to get him around so that he could come up with the money to have his leg taken off. It had gangrene, and he had 30 days to have it removed. The doctor wanted $100 to cut the leg off and another $25 to put him to sleep. I gave him the $125. He counted it out, and he handed me $25 back. He said, “That’s okay. I don’t need to be put to sleep.” I gave the money back to him.

Three days later I got a call from down there. He had had his leg off and was getting around in a wheelchair. His wife had found a job, he was in the house taking care of the children, and they were going to be a very happy family.

When these people come to us, some are driven, some are carried, some come by wheelbarrow or hand truck. Some crawl.

In Zimbabwe a fellow crawled on his elbows for 17 kilometers to get to us. We put him in the wheelchair, and he was going around and around with a big smile on his face. After a while he pulled himself out of it and sat on the ground. We asked him why. He said, “I’ve had my turn.”

He didn’t realize he could keep it.

This year he came back with his children to show us that he had cared for the chair so well that it was just like new.

We gave a chair to a woman in South Africa who had not gotten one on a previous trip. She said to me, “I’ve prayed every day for two years that God would send you back with a chair, and here you are.”

When you give people these chairs, they grab your hand, they cry, they thank you, they very often say a prayer. And they always smile.

Most of us think of a wheelchair as a confinement, but to millions of people it is not confinement, it is freedom—freedom to move, to go to school, to get a job. A chair is hope, self-reliance, independence. Most important, it is dignity.

In a way a wheelchair is to the body what the education you have received is to the mind. You would be overwhelmed by how much a little chair with wheels can mean—how it can change lives. A young South American woman who was going to school—just like you have been—got hit by a truck. She spent the next 11 years in bed. We gave her a wheelchair. The next day she came back and said she had reenrolled and was starting her studies the next day.

In a matter of moments a chair can change a personality. People go from not smiling to smiling. As soon as we put one young boy in a chair, he took off for a water fountain and started splashing the water. He splashed himself, he splashed other people, then he went and felt a leaf on a tree. These are such simple pleasures that we take for granted.

There is another story that means a lot to me. We had a woman from Mexico who has worked for us for 12 years. She heard we were going to Mexico City to deliver wheelchairs. She informed us that she had a nephew in Mexico City whose name was Angel. He had a terminal disease. He had first lost his eyesight and had now lost his mobility. She asked if we could give him a wheelchair so he could be mobile during the limited time he had to live. I said yes and told her to have his parents come to our distribution. His parents found us and were crying. They said that Angel had received his wheelchair and wanted to thank me. They brought him in his wheelchair, and I spoke to him so he would know where I was. He then took my hands and looked up with his blind eyes into my eyes and said, “I’ll see you in heaven.” I was not able to even answer him.

These people’s stories may seem far removed from this beautiful campus, so what do they have to do with you graduates? I think these stories reveal a number of truths about life and how we live it.

Graduates, there is so much need out there in so many different ways. In terms of wheelchairs alone, between 100 and 130 million people worldwide cannot afford a wheelchair and need one. China needs 20 million chairs. India needs 30 million chairs. Next year we will give away 200,000 wheelchairs in 100 countries. Our goal is to provide one million chairs by 2005. The Church is really helping us with this ministry of mobility.

This wheelchair mission is the greatest thing that has ever happened to me. I used to give money to good causes because I felt obligated to give back. Many people give because they feel obligated—which is good—but they don’t feel the giving with their hearts. If I have any wisdom worth this honorary doctorate that you have so kindly given me, it is this: Giving is not a duty; it is a joy.

Let me close with one last story. When I was in Yugoslavia, this man was telling me about his teenage son. The man said he saw his son step on the land mine that blew him onto another one, which then blew him onto another one. By the time the father got to him, most of his life was gone. The man frantically found an old pickup truck to take the boy to a place where he could receive blood. The young man stayed 11 months. Although he lived, he lost an eye, his hearing in one ear, and both legs up to his hips.

The man said that although they were refugees, they had a house and they had food to survive. And now with this wheelchair he could give his son what he wanted most, and that was to go out and sit in the sun.

Ladies and gentlemen, I don’t think that the desire of a human being to sit in the sun is too much to ask.

As you graduates leave here today full of brightness and possibilities, I ask that you not forget those who lie in the lonely depths of darkened rooms—immobilized perhaps physically, perhaps mentally, perhaps by poverty or despair.

I ask that along life’s path you take the time now and then to help your fellowman sit in the sun. 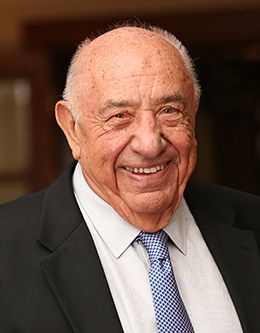 Kenneth E. Behring was a philanthropist and founder of the Wheelchair Foundation when this commencement address was given on 15 August 2002.

As We Now Go Forth

Hands Across the Sea