“The Ultimate Triumph of Truth”

5:51
Full Video
Just as with Brigham Young, Leonardo da Vinci’s ultimate allegiance wasn’t to a single discipline but rather to the “triumph of truth.” No individual or perspective is the owner of truth; truth is as widespread and diverse as those who search for it.

Good morning, Elder Kearon, President Worthen, those from the university administration, members of the board of trustees, faculty, honored guests, and, of course—the reason why we are all here—the class of 2019.

First and foremost I would like to congratulate you for your hard work and dedication. Every one of us has shown through wholehearted devotion to our learning and studies that we deserve to be sitting here right now. Many of us have spent more hours in the library than in our own homes, pulled more all-nighters than we would like to admit, and, if you are like me, lived off vending-machine pretzels for four years. There is no other group more deserving to be here right now, and it is an honor to represent you.

Without question, this is one of the most diverse groups of students to ever walk across the BYU stage. Here at BYU there are 128 languages spoken on campus, there are more than a hundred countries represented, and the number of international students continues to increase. We come from a diversity of backgrounds, and each one of us testifies to the complexity of our world and the need for interdisciplinary thinkers.

In less than a week it will be exactly the 500th anniversary of the death of the quintessential Renaissance man, one of the greatest interdisciplinary thinkers of all time: Leonardo da Vinci. Born the illegitimate son of Ser Piero in the Italian city of Vinci, Leonardo da Vinci would go on to create the two most iconic paintings in history—the Mona Lisa and The Last Supper—and produce some of the earliest diagrams of human physiology in intoxicating detail. He also created the first blueprints of a helicopter, tank, parachute, diving suit, submarine, robotic knight, and revolving bridge. He did all this before the world discovered plumbing. What separates Leonardo da Vinci from other great minds is his complete disregard for the distinction between disciplines, which we can see in this formula inspired by his notebooks:

1. Study the science of art.

2. Study the art of science.

3. Develop your senses—especially learn how to see.

When I was young, much like da Vinci, I ­identified more as an artist than as a scientist. I can remember sketching the intricate vasculature of plants and copying the textures of stones and feathers behind my childhood home. That might sound impressive for a kid, but, to be honest, I mostly just drew Pokémon. I am a far cry from the next da Vinci, but, as I have matured, my appreciation for Leonardo’s vision has grown. There is no aspect of my research that hasn’t been affected by the arts. Whether I am rendering models of organic compounds, simulating peptides folding in real time, or staining human tumors, I have been most successful when I have viewed my research as art to be completed one stroke at a time.

The overlap between disciplines is more than we realize; new fields are constantly being born as old fields merge and break apart. The more I learn about Leonardo da Vinci’s life, the more I realize that his genius can be distilled to the invisible threads connecting disciplines, which he wove into a science so beautiful it was mistaken for art and art so technical it was mistaken for science.

We live in an interdisciplinary age in which ground-breaking research is happening at the interface of disciplines, in which neuroscience merges seamlessly with artificial intelligence, in which physics elucidates the complexity of cancer biology, and in which robotics and nanotechnology are revolutionizing medicine. From the teachings of Brigham Young we learn that

every discovery in science and art, that is really true and useful to mankind, has been given by direct revelation from God. . . . It has been given with a view to prepare the way for the ultimate triumph of truth.2

As university students, we are seekers of all truth, and our time at BYU marks only the beginning of that journey. There is a temptation to view a diploma as written permission to stop learning and ignore the fact that we receive it in a ceremony called “commencement,” not “concludement.” For Leonardo da Vinci, learning was synonymous with living; as long as he was alive, he was searching for truth.

Today we are faced with an entirely new set of problems that require a new generation of Renaissance men and women. We will be the ones to create connections where there were once disconnects, build bridges where there were once chasms, and find understanding where there was once confusion. The idea inspired by the great scientist-artist is as true today as it was 500 years ago: “Everything connects to everything else.” It is our job to discover, create, and engineer those connections wherever they are missing. The world is counting on us.

Thank you, and congratulations to the class of 2019!

1. Tony Buzan and Barry Buzan, The Mind Map Book: How to Use Radiant Thinking to Maximize Your Brain’s Untapped Potential (New York: Penguin, 1996), 288. 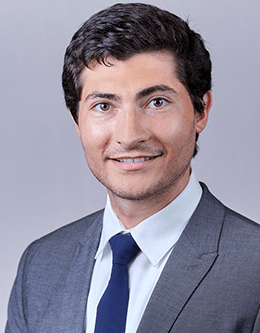 David W. Kastner spoke as the representative of his graduating class at BYU commencement on April 25, 2019.

The Light of Truth

A Celebration of Learning