"Usually the road to victory involves encountering a great many mistakes. The Lord wants us to learn from our mistakes because that is how we become strong. He does not expect us to be perfect, just to keep trying."

The last time I spoke on the same program with our son Michael was at his missionary farewell. And I was equally proud that day as I am today. But he has not always been so wise. He has grown in wisdom and judgment. After such a serious talk, I cannot help but tell a story on him.

Shortly before Michael went on his mission, his brother-in-law Tom Jacobson made him an offer. If Michael would let Tom break three raw eggs on Michael’s head, Tom would give him twenty dollars. It sounded like a good deal. The degradation would last only a short time, could be removed by putting his clothes through the washing machine and jumping into the shower, and he could always use an extra twenty dollars. Picture him, if you will, sitting in our kitchen with a towel wrapped around his shoulders as the first egg was cracked on his head. Picture also his brother-in-law gleefully and ceremoniously rubbing the contents into Michael’s hair. Then came the second egg. The streams of intermixed deep yellow and clear liquid began inching down his cheeks, into his ears, nose, and eyes, and into the corners of his mouth. But not to worry, just one more egg and the twenty dollars would be his. So he waited. And waited. And then waited some more. And then he heard Tom say, “Naw, it’s not worth it.”

As Michael demonstrated, some of our experiences in life could prove successful, and sometimes we could end up with egg on our face, which leads me right into my talk.

I love the cool brightness of September mornings with their contrasts of harvests and new beginnings. For me, the start of each school year is something of a contrast as well. My years as a student and then as a teacher stir mixed memories in me. To this day when I enter a place of learning, the smells of old books and new pencils awaken visions of expectations as well as fears. There is the excitement of starting anew, but there is also the trepidation of failure.

This campus is filled with potential. I am aware of your abilities, your worthiness, and your desire to learn. I feel humble in your presence. I also wonder if you, too, feel somewhat overwhelmed by each other’s brilliance. Do you ever fear whether or not you will succeed? I want you to know that each night when Rex and I kneel in prayer, we plead for your success. I’m sure as you study and prepare your assignments, you pray, too. So if you work hard and ask for divine help, will you be successful? Yes, you will. But let me tell you a secret: Much of our success will depend on how we handle an occasional failure. Will we be defeated or will we learn from our mistakes? It is about facing failure, learning from our mistakes, and thus experiencing success that I would like to speak.

I remember vividly a distant September morning from my past. I had just instructed my first-grade students to write their names on the top of a paper after folding it in half. There was a bit of a scurry as everyone completed this two-part task rather quickly. Everyone, that is, except John and Bart. John’s paper was wadded tightly in his hand and his head was on his desk. Bart stared blankly at me with wide, inquisitive eyes. I could feel their inner cries for help and moved quickly to render aid. John’s distress seemed more demanding, so I asked Bart to begin on a picture. John had tried to fold his paper but had done it wrong and was frustrated by his mistake. No attempt to show him how could jar him into action. “You do it for me,” he finally cried.

By the time I got to Bart, the class was getting restless, and my first inclination was to fold his paper for him and get on with things. He could learn another day. “No,” he stopped me. “Show me how.” Then I noticed his name wasn’t on his paper. “Show me how to write my name, too,” he pleaded. I knelt beside him and said softly, “Okay, make a ‘B’.” His eyes grew wider. “How do you make a ‘B’?” he asked, unashamed.

I was a new teacher and that was a long first week. During the first three months of school those two boys needed more help than the other children, but there was a major difference in the way each responded to his mistakes. John continued to feel diminished by every error and could concentrate only on his failures. By staring at the stack of wadded-up paper on his desk, he could not visualize success. Bart, on the other hand, thrived on learning from each mistake and even taped the best printing of his name on his desk each week so he could mark his progress.

It’s interesting to note that at first the ability of both boys was similar, but by the end of the school year, Bart was surprising everyone. Both John and Bart began the school year a bit less able than the other children, at least in their most measurable preparation. Yet one boy was able to see beyond his inadequacies and move forward while the other was not.

Like my two students, we often feel in adequate, especially with the beginning of a new chapter in our lives. It is not out of the ordinary to feel this way when we are reaching up and stretching to climb higher. It is reassuring, however, that we are all afraid of failure. It is a common denominator among us. Our true test is how we embrace that fear. I like Emerson’s approach: “They can conquer who believe they can. . . . He has not learned the lesson of life who does not every day surmount a fear” (“Courage,” Society and Solitude, 1870).

Yet what of our attempts that are not successful? How do we view them? Albert Einstein has said: “I think and think for months and years. Ninety-nine times the conclusion is false. The hundredth time I am right.” He may have been a genius, but the theory of relativity didn’t just pop into his mind one night at Hogi Yogi. Nor did Marie and Pierre Curie unlock the secret of radium isolation while watching reruns of Star Trek.

As Elder Neal A. Maxwell states, “God does not begin by asking us about our ability, but only about our availability, and if we then prove our dependability, he will increase our capability!” (“It’s Service, Not Status, That Counts,” Ensign, July 1975, p. 7).

Does this mean, however, that a willing heart guarantees immediate success? Usually the road to victory involves encountering a great many mistakes. The Lord wants us to learn from our mistakes because that is how we become strong. He does not expect us to be perfect, just to keep trying. Hasn’t he told us, “I give unto men weakness that they may be humble; . . . for if they humble themselves before me, and have faith in me, then will I make weak things become strong unto them” (Ether 12:27).

This is why every twenty-four hours our Father in Heaven gives us a brand-new day—a chance to correct yesterday’s mistakes. It is somewhat parallel to theGroundhog-Day theory: We just get another chance to keep on trying. When we attempt anything new, it is easy to feel discouraged. No one is alone in that regard. Initial failure, or a less-than-desirable result, is the price we pay for learning anything new. Sometimes we compare ourselves with others who are more experienced or whom we perceive as being more gifted. At such times we want to give up, forgetting the process of progress and the road to perfection. As we read in Joshua, “Be strong and of a good courage; be not afraid, neither be thou dismayed” (Joshua 1:9).

Margaret Mitchell, author of Gone With the Wind, spoke the following concerning her frame of mind during the writing of her famous novel:

It was going along pretty well until somebody sent me a new book called John Brown’s Body, by Stephen Vincent Benet. When I finished reading that magnificent Civil War epic, I burst into tears and put my own manuscript away on a closet shelf. John Brown’s Body gave me such a terrible case of the humbles that it was months before I could find the necessary faith in myself and my book to go on.

Momentarily, Margaret Mitchell doubted herself too much to go on. As William Shakespeare put it, “Our doubts are traitors, And make us lose the good we oft might win, By fearing to attempt” (Measure for Measure, act I, sc. 4, lines 77–79).

My student John saw his crumpled-up paper and visualized failure. He didn’t even want to try. But Bart taped his name to his desk and kept his eye on how it would look when written correctly and then marked his progress.

Our Savior is the perfect image for us to visualize as we strive to be successful. We need to tape his image on the pages of our lives so that we may visualize his perfect life as we lift ourselves up from our failures. That we may mark our progress as we learn from our mistakes is my prayer, in the name of Jesus Christ. Amen. 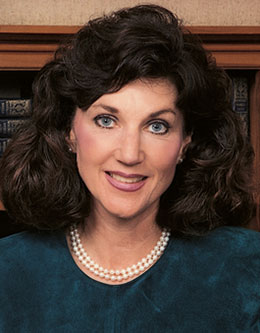 Your Show Must Go On