Though somewhat similar to last year’s graduating class, this year’s class is unique. Like last year’s graduates, the graduates in this year’s class have experienced the radical disruption of the traditional collegiate experience caused by the COVID pandemic. But unlike the graduates in last year’s class, you have seen the recent welcome signs of a return to normal—as witnessed by the packed Marriott Center in which we are assembled today. As we have gathered more frequently and in larger numbers these past few months, there seem to be renewed energy and a feeling of closeness that were lacking when the pandemic was raging. Those different feelings can largely be explained by one word—propinquity.

the tendency of individuals to form close relationships with people they repeatedly encounter. That is, the more often one comes into contact with another person, the more likely it is that one will form a friendship or romantic relationship with that person.4

This phenomenon—this propinquity effect—was first theorized by three professors who noted, among other things, that “residents of an apartment building living near a stairway . . . tend to have more friends from other floors than those living further from the stairway.”5 The theory was that this was because those living near the stairway had more contact with those from other floors who were using the stairs.

My graduation advice to you consists of three things you can do to make propinquity more of a positive factor in your lives.

First, consciously seek in-person contact with others. I hope our use of technology that has allowed us to meet in the digital world during the pandemic does not alter our appreciation of truly being physically present with others. While social media can expand the number of people with whom we associate, and while studies suggest that some kind of “virtual propinquity” can exist,6 research also shows that “online friendships are . . . lower in quality than offline [in-person] friendships”7 and that “moving from online to offline communication channels such as face-to-face . . . is an important step towards increasing the closeness in relationships.”8 In a world in which relationships are increasingly ephemeral and digital, it is important to take the time and effort to visit face-to-face so the propinquity effect can have full positive impact. As former United States diplomat George Ball was fond of saying when explaining why face-to-face meetings were so important, “nothing propinks like propinquity.”9

Second, consciously seek positive in-person interactions with those with whom you disagree. We live in a time in which it is easy to associate only with those whose views correspond with our own. And algorithms drive us in that direction in the digital world. It is also a time in which people are increasingly polarized with respect to their views on almost every issue. Our prophet, President Russell M. Nelson, has recently pleaded with us to end conflicts in our personal lives.10 Propinquity can help us in that regard. As one source explained:

. . . Propinquity [makes] a huge difference in the trust and respect you have for each other.11

Let me suggest in this regard that serving with others can have a multiplier impact on the propinquity effect. If our in-person interactions with those with whom we disagree include serving with them in some common endeavor, the relationship will deepen and be more enduring. As President M. Russell Ballard observed, “When we serve together, we realize that our similarities are stronger than our differences.”12 Frequent close interaction while serving with others will not only bless those we serve but also create bonds of propinquity that will help us deal positively with our differences.

Third, and most important, the propinquity effect can have the largest impact on us if we apply it to our relationship with the Savior. While literal face-to-face contact with Christ may be rare during our mortal existence, Christ invites us to have regular and frequent close communication and contact with Him, with the promise that our relationship with Him will deepen and strengthen as a result. “Draw near unto me,” He promises, “and I will draw near unto you.”13

Recent studies have suggested that the causal direction of the propinquity effect goes both ways. While the classic theory postulates that being close to someone increases one’s desire to be with that person, more recent studies provide support for the idea that an increase in one’s desire to be with another decreases the perceived distance between the two.14 The Lord’s promise that as we draw closer to Him, He will draw closer to us seems to extend beyond mere perception of closeness to Him. It points to the day (either in this life or in the next) when we will see Him face-to-face—a form of eternal propinquity.15

The propinquity effect thus adds new meaning to President Nelson’s recent admonition to seek “daily experiences worshipping the Lord and studying His gospel” and “give Him a fair share of [our] time.”16 By following that prophetic counsel, we can experience true propinquity as we draw closer to and become more like the Savior.

So as you finish this stage of your BYU ­experience, I urge you to take full advantage of ­propinquity—spend more in-person time coming to know your family, your friends, your perceived antagonists, and especially the Savior. I promise that as you do, your lives will be richer and more joyful. I so promise in the name of Jesus Christ, amen.

9. Although the phrase was first used by Ian Fleming as the title for chapter 21 in Diamonds Are Forever (1956), U.S. undersecretary of state George Ball “popularised the idea in politics where it came to be known as the Ball Rule of Power, which states that ‘the more direct access you have to the president, the greater your power, no matter what your title actually is’” (Mark Eltringham, “The Office Will Always Live On Because Nothing Propinks like Propinquity,” Workplace Insight, 16 August 2018, workplaceinsight.net/the-death-of-the-office-nothing-propinks-like-propinquity.

11. “What Is Propinquity Effect in Social Psychology,” Sociology Group, sociologygroup.com/propinquity-effect. 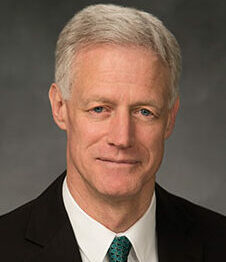 Pointing Our Souls to Christ

The Return of the King