Wife of the President of Brigham Young University

10:44
Full Video
Highlight Video
Too often we ask God, "Are you talking to me?" That question is as unproductive in the gospel context as it is in a one-on-one interview. When it comes to God and His prophets, we should assume He is talking to us because He clearly is, and we should listen.

Have you ever suffered from logokophosis?1  I have. Allow me to share one example.

Early in our marriage, while Kevin was pursuing his education here at BYU, I needed to find a job. Fortunately I was able to get an interview for a position for which I felt qualified. I showed up at the appointed time. I was directed into the office of my potential employer, who graciously greeted me and kindly asked me to be seated while he took his seat behind his desk. We exchanged pleasantries. Things were going well.

Then he began, at length—and I feel it necessary to emphasize “at length”—to inform me about the position in which I could potentially be employed. It was my responsibility to stay focused and pay attention, but I wasn’t doing a very good job of it. It may have been a combination of several things: a comfortable chair, the pleasant room temperature, the steady, even voice of the interviewer, or the interesting memorabilia in the office that became somewhat of a distraction to me while he spoke. Maybe it was because he was a math professor explaining some of his work—and math and I have had a long and not-so-pleasant history. I don’t know.

Whatever the case, the next thing I knew, he had stopped talking, and I realized I had no idea what he had just finished saying. There was a complete, awkward silence. I snapped out of what I would best describe as a stupor of thought and figured that I needed to say something. Trying to save face and say something clever, I heard myself speak the five-word question you should never ask in a one-on-one interview with a potential employer: “Are you talking to me?”

You may not be surprised to learn that I didn’t get that job. Why? Because I had temporarily suffered a bout of logokophosis during the interview. Logokophosis is a real medical condition in which one lacks the ability to comprehend spoken language. Its literal Greek origin means “word deafness.” My bout of logokophosis was not brought on by any physical malady; rather, it was self-inflicted. I allowed myself to turn a deaf ear to the valuable words that were being spoken to me in that interview. I didn’t even try to understand. I had graciously been given the time for an interview, and I was, to say the least, a very unsuccessful listener. I had suffered from logokophosis.

In a general conference address several years ago, Elder Jacob de Jager explained the meaning of logokophosis in a gospel context. He defined logokophosis as “the inability to hear or understand spoken directions,”2 especially divine directions. Elder de Jager emphasized that

the scriptures are replete with directions spoken by holy prophets in all dispensations because “the voice of the Lord is unto the ends of the earth, that all that will hear may hear.” [Doctrine and Covenants 1:11] Yet time and again [as we suffer from spiritual logokophosis] we have to be asked to be better listeners. President Marion G. Romney sometimes wonders out loud, “How many tellings does it take—how many repetitions of counsel? How many individual corrections must be given?”3

Overcoming logokophosis, whatever the context, is essential if we want to succeed in the classroom, in our chosen occupation, or in any other good path we may follow. Most important, we need to overcome spiritual logokophosis to become better disciples of Christ and to respond to President Russell M. Nelson’s call to assist in gathering Israel.4 In other words, if we suffer from spiritual logokophosis, we cannot achieve exaltation without overcoming that challenge and becoming a better listener.

Too often we ask God, “Are you talking to me?” That question is as unproductive in the gospel context as it is in a one-on-one interview. When it comes to God and His prophets, we should assume He is talking to us because He clearly is, and we should listen.

What causes us to suffer from spiritual logokophosis? Why do we sometimes turn a deaf ear and not listen to the counsel of the Lord? My failed interview provides several possible answers. Perhaps it is because we are too comfortable in our current situation. Or maybe it is because we are focused on all the distractions that surround us. Maybe it is because—as with math and me—the subject is not one we enjoy. Whatever the cause may be, spiritual logokophosis is debilitating and causes us to miss out on wonderful opportunities.

The Book of Mormon contains several examples of individuals who failed to achieve their divine potential and to obtain heavenly blessings because of spiritual logokophosis. The first who come to mind are Laman and Lemuel. Time and time again these brothers were deaf to the spiritual words given to them. They assumed that God was speaking to someone else and not to them.

Laman and Lemuel complained to Nephi:

Behold, we cannot understand the words which our father [Lehi] hath spoken. . . .

And [Nephi] said unto them: Have ye inquired of the Lord?

And they said unto [Nephi]: We have not.5

Laman and Lemuel suffered logokophosis because they did not even try to hear or understand the “still . . . voice”6 of the Lord. They had reached the point that even though they had seen an angel and had heard God’s voice, they “were past feeling” and “could not feel his words.”7

Alma the Younger and the four sons of Mosiah also suffered from spiritual logokophosis. They set out “to destroy the church” by “lead[ing] astray the people of the Lord, contrary to the commandments of God, [and] even the king.”8 They were purposefully deaf to the words of God and the laws of the land. “[They] rejected [their] Redeemer, and denied that which had been spoken of by [their] fathers.”9

However, we can find hope from Alma and his colleagues, who were able to overcome their logokophosis. Due to divine intervention and in answer to the prayers of Alma’s father, Alma the Elder, they were “brought to the knowledge of the truth”10 or the word of God through “the angel of the Lord [who] appeared unto them” and then “spake as it were with a voice of thunder, which caused the earth to shake upon which they stood.”11

From this experience, these young men finally understood that God’s words applied to them, and they ultimately repented and accepted the corrections that were given to them. After successfully overcoming their spiritual logokophosis, they tried to help others who were suffering from the same malady. They “began from [that] time forward to teach the people . . . through all the land . . . the things which they had heard and seen, . . . preaching the word of God.”12

So, how do we follow Alma’s example? This question is especially important in our current time and place, as duly described by President Nelson:

We live in a time prophesied long ago, when “all things shall be in commotion; and surely, men’s hearts shall fail them; for fear shall come upon all people.” . . . Commotion in the world will continue to increase. In contrast, the voice of the Lord is not “a voice of a great tumultuous noise, but . . . it [is] a still voice of perfect mildness, [like] a whisper, and it [pierces] even to the very soul.”13

President Nelson then provided one important key to defeating our potential spiritual deafness: “In order to hear this still voice, you . . . must be still!”14 In other words, for us to overcome spiritual logokophosis, we need to constantly and deliberately turn our attention to our Heavenly Father’s words. This is why President Nelson implores each one of us to “discipline yourself to have time alone. . . . Open your heart to God in prayer. Take time to immerse yourself in the scriptures and worship in the temple.”15

We need not suffer from spiritual logokophosis. We need not ask whether God is speaking to us. He always is. We just need to be better and more deliberate listeners. As we strive to internalize and follow the counsel He provides through scripture, living prophets, and personal revelation, we will be successful in school, at work, and in our quest for perfection. May we so be blessed is my prayer, in the name of Jesus Christ, amen.

1. I want to thank BYU associate librarian Holt Zaugg from the Harold B. Lee Library for bringing the word and concept of logokophosis to my attention. 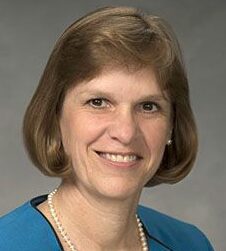 Remembered and Nourished by the Good Word of God