If He Is Our Light

When that Spirit moves upon the waters—when it moves upon us—it can organize and enlighten those gifts that we have worked to develop and, through the sacrifice of our time and effort and abilities, bring forth remarkable creations out of those elements.

A wonderful painting hangs in the Metropolitan Museum of Art in New York. Entitled Aristotle with a Bust of Homer, it was commissioned during a time when its creator—the great Dutch painter Rembrandt—was facing personal financial difficulty, made even more grating by the artistic demands coming from his patrons. Art historian Sister Wendy Beckett observed that, for Rembrandt, immersed in this period of personal and creative struggle, the painting seemed “to have sparked off some deep inner response”1 concerning creative integrity—what, and how, we choose to “create” with the gifts we are given.

The painting depicts the great, lavishly dressed philosopher Aristotle wearing a long, gold chain—a present from his most famous student, Alexander the Great. Aristotle’s hand rests on a small statue of the immortal poet Homer, who had already passed out of this world and into legend. Also present in his thoughts, but invisible to the eye, is Aristotle’s own great mentor, the famed philosopher Plato. Under Plato’s tutelage Aristotle learned to seek after knowledge and to develop his remarkable intellectual gifts so that he too could achieve new understanding and pass those great skills of thought on to another generation.

In turn, Aristotle became the teacher and received Alexander as his student. No doubt he hoped that Alexander could embody his ideal of a philosopher-king: a ruler as good and wise as he was powerful. But although Aristotle used his gifts of intellect in the pursuit of knowledge and understanding, he could only stand by and watch as Alexander used his gifts not to further knowledge or establish peace among nations but to wage war and build an empire on the bodies of the conquered.

Compared to Aristotle and Alexander, we know very little about Homer, the poet who composed The Iliad and The Odyssey and whose likeness captured Aristotle’s attention. In good Greek tradition Homer was supposed to have been blind—although most poets and prophets were depicted as being “blind,” symbolizing not so much a physical defect as a moral strength: being blind to the falsity and compromises of mortality but seers of the realities beyond. Their writings therefore presented a different standard—a true standard—by which a man might measure himself.

In contrast, even in his lifetime Aristotle had a taste of the honor that would follow him for thousands of years after his death, but that recognition does not seem enough to quiet the great man’s soul in the midst of solitary introspection. Where Plato had trained Aristotle, a great philosopher and friend of man, Aristotle had trained Alexander, a conqueror, a worldly king of kings who gained the whole world, then lost it all when he died at the age of 33.

Through Rembrandt we see Aristotle contemplating the worth of what he will leave behind—including his writings, which would serve as the foundation of Western scientific and philosophic thought for more than a thousand years. And yet he seems drawn to ponder whether he has actually been “successful”: whether he has properly used his gifts of intellect and of teaching—whether he has done what he was truly capable of doing. We have caught him in a moment of private discourse with the blind, transcendent poet—as if wondering what significance the poet’s blind eyes would attach to his golden chain, fashioned from the plunder of Alexander’s victories. We must wonder, with him, whether a teacher is truly honored by such a gift if the giver is a student who failed to learn.

Consider Aristotle’s dilemma. The question of true success—of feeling satisfied that we are rising to the promise and responsibility of the gifts we are given—can weigh heavily upon anyone, particularly a young graduate. That is why it can be helpful to keep in mind that the real difficulty is not usually in knowing what to do but rather in doing it. As William Shakespeare rather slyly observed, “If to do were as easy as to know what were good to do, chapels had been churches, and poor men’s cottages princes’ palaces” (The Merchant of Venice, act 1, scene 2, lines 13–15).

The American poet Henry Wadsworth Longfellow translated Shakespeare’s negative into a positive, with familiar sentiments for any college student:

The heights by great men reached and kept
Were not attained by sudden flight,
But they, while their companions slept,
Were toiling upward in the night.
[The Ladder of St. Augustine (1858), stanza 10]

Two millennia after Aristotle, the inventor genius Thomas Edison in turn echoed Longfellow as he wrote, “Many of life’s failures are experienced by people who did not realize how close they were to success when they gave up.” Edison also formulated the famous equation for achieving that success; namely, that “genius is 1 percent inspiration and 99 percent perspiration.” It is unsettling to consider what might have happened if Edison had exerted only 95 percent of that necessary perspiration and the final 1 percent—that inspired spark—had never come.

Now, with Aristotle and Rembrandt and Edison in mind, consider great scientific achievements or works of art that have especially moved you, leaders who have affected you, and writers and teachers and thinkers who have inspired you. Then consider an image from Genesis:

With great time and effort our abilities can be honed and polished and refined until they are capable of bringing forth great works. However, without that brooding, creative Spirit—without that spark of divine light—those gifts remain dormant, “without form, and void.” But when that Spirit moves upon the waters—when it moves upon us—it can organize and enlighten those gifts that we have worked to develop and, through the sacrifice of our time and effort and abilities, bring forth remarkable creations out of those elements.

While still a BYU student himself, my father—like almost every graduate in this auditorium—was profoundly touched by the mentoring and friendship of remarkable professors at this university. He particularly recalls a conversation with Dr. Robert K. Thomas, who served as the university’s provost.

“The problem,” said Dr. Thomas, “is that so many of our students leave with the idea that they should seek material prosperity, worldly influence, and prestige—that this is what the Lord meant when He said, ‘Let your light so shine before men.’”

Then, lifting his hand and tracing a rising arc, he said, “But all too often, by the time their star is up—the light is out.”

Looking my father squarely in the eye, he said, “Don’t let that happen to you.”

Let us not allow our light to go out—either through neglect or misuse of our abilities or through the mistaken conviction that the light is our own. Think of Aristotle, brought to silent contemplation at the end of a long and successful life. Think of poor men’s cottages that might have been princes’ palaces. Think of Edison, who “while [his] companions slept, / [Was] toiling upward in the night.” Then remember the divine Spirit brooding upon the waters. Yes, the Savior admonished us to “Let [our] light so shine before men, that they may see [our] good works” (Matthew 5:16), but He also taught, “I am the light which ye shall hold up” (3 Nephi 18:24).

And, if He is our light, our star will never go out. In the name of Jesus Christ, amen. 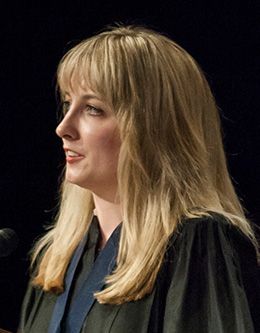 Rachel Kimball Wilcox spoke as the representative of her graduating class at BYU commencement on 17 August 2006.

Be Thou an Example