To be effective we must develop eyes to see all flavors of human achievement and lend support, approval, and encouragement to the invisible crusades. It will be repeatedly necessary that we wade in to help, unflinchingly and nonjudgmentally.

President Samuelson, members of the board of trustees, administrators, faculty, guests, and especially graduates, we’ve made it! We’re graduating from Brigham Young University, and today we are here to celebrate our success.

In fact, one of the most important lessons I’ve learned in my time at BYU is to view success differently. I’ve learned that life demands high effort from everyone all the time but does so in two general forms, either of which can result in success.

The first form I’m going to call “climbing.” This describes times in life in which one must devote high effort to developing talents, maximizing opportunities, and realizing potential. Climbing is characterized by persistence and self-motivation and generally results in achievements that our society applauds and actively tracks—résumé items, of which receiving a college education is but one example. Most often when we imagine a “successful” person, we think of someone who has climbed.

I have come to better understand another form of success. Where success means the favorable ending of a situation requiring effort, I contest that in many cases ­enduring or merely surviving is succeeding. With permission, I want to share the story of one of my good friends. For some time now I have watched this friend struggle with major organ failure. Every semester she registers for classes, becomes severely ill, and is forced to withdraw. She has waited and waited on a transplant list. This year she received a transplant and returned ready to dive into classes at last. Then complications arose, and she learned of a mistake in how the new organ was attached. Now she is waiting on the transplant list again.

My friend is not here graduating with us today. After four years of college, her résumé is not much more bulked and polished than when we arrived, so it may seem that success is postponed for her. I have more than once heard her say disappointedly how very long it will take her to graduate. Yet the way she continues to face it all with dignity is, for now, a favorable ending, making my friend one of the first people I and others who know her would consider successful.

On a separate occasion I was asked to judge scholarship applications for at-risk students graduating from alternative high schools. I was devastated to find that every applicant had more than one looming challenge that I would consider a substantial academic setback: homelessness, teen parenthood, legal trouble, terminally ill parents, learning disabilities, depression, and other serious socioeconomic hurdles. It weighed on me how badly each needed a scholarship—as much for a morale boost and vote of confidence as for financial means. In their essays each conveyed an apologetic tone for how little they had accomplished academically. Though they were remedial students, I felt they underestimated how commendable their efforts were, and I was saddened that their already heavy burdens were exacerbated by a sense of low worth.

I would hardly be saying anything new by asserting that continued effort and overcoming barriers qualifies as success. But actually what I’ve realized is that enduring is harder than climbing—besides being much less commonly rewarded or even acknowledged. So often those enduring the most feel they are accomplishing nothing. Among my own experiences as a student, the most exacting have been those that involve enduring, and were I given the choice, I would always prefer to climb. That is why I am most grateful to be graduating from BYU today.

To our administrators, professors, family members, and other supporters present, I know I speak for the whole class when I say that we are grateful to you for organization, instruction, financial and emotional support, job opportunities, and mentoring. We recognize that we’ve made it here today riding on the contributions of so many others besides ourselves. And of course we are grateful to God. We have all been blessed with a period of climbing with four or more years free enough of trouble to allow us to graduate. We have spent these years preparing to contribute to a society in which one in five children lacks consistent access to food,1 one in twelve has been sexually abused,2 and roughly two in three elementary school classes include a student with a parent in prison.3 In so many cases the adults who permit and perpetuate these circumstances are those who made up the similar statistics a generation ago. Against such a sobering background we also realize that where “much is given much is required.”4

Today as we finalize our commitment to “go forth to serve,” I suggest that to be effective we must develop eyes to see all flavors of human achievement and lend support, approval, and encouragement to the invisible crusades. It will be repeatedly necessary that we wade in to help, unflinchingly and nonjudgmentally. Standing as we do and will along the path to healing in Christ’s Church, it is crucial that association with us be emotionally safe for anyone hurt and discouraged. And when we ourselves become discouraged, we can look to the Savior, who said, “I was an hungred, . . . naked, . . . sick . . . : I was in prison, and ye came unto me.”5

That the world will be a little better for the Class of 2013 is my prayer. Thank you. 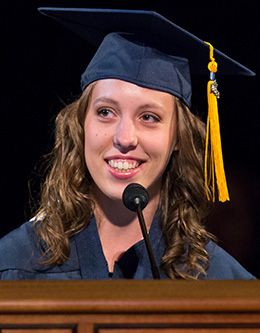 Rachel Thayer spoke as the representative of her graduating class at BYU commencement on 15 August 2013.

God Did Not Put Us Here to Fail

The Lord Desires Your Success