Some Glances at the Past at Thanksgiving Time

A special day set aside for thanksgiving seems very appropriate, although we should always be thankful for our blessings. The Lord suggests—even more than suggests, He commands—that we should be thankful for all things. For example, in a modern revelation reiterating in our day some of the basic commandments given through Moses, we read, “Thou shalt thank the Lord thy God in all things” (D&C 59:7). A few verses later in the same section, after counsel on fasting and prayer, a reward for faithful obedience coupled with thanksgiving is promised.

And inasmuch as ye do these things with thanksgiving, with cheerful hearts and countenance, . . . the fullness of the earth is yours. [D&C 59:15–16]

May I share some verse which deals with the significance of Thanksgiving Day:

What Thanksgiving means
Thanksgiving means a lot of things
To different ones I know.
To some it means a wintry day
With gusty wind and snow.
Some others see a sunny day
A warm and balmy time,
With flowers growing in the yard
And orange trees or lime.
Some see a colored autumn scene,
A white and frosty morn,
With yellow pumpkins in the field
And rusty rows of corn.
To some it’s just another day,
And toil the body saps.
No chance to look ahead to see
A holiday perhaps.
To some it means a day to stuff
With turkey, sauce, and pie.
They eat so much it really hurts;
Then on a bed they lie.
Those football games in constant stream
On television screens
Take up the day from morn till night—
At least, that’s how it seems.
But few there are who see this day
As one on which we kneel
In thanks to God for countless things
That should us to Him seal.
Our health, our wealth, our freedoms dear,
Our family and our friends,
The joy of living in this day—
The list just never ends.
The pilgrims felt it worth the time
To set aside a day
To think of God and thank Him, too,
In their own simple way.
We, too, should give to Him above
A day from busy life,
A day when we can think of Him
Without internal strife.
Just pause and ponder on the name—
Thanksgiving Day—it ranks
As one we make a holiday,
A special day for thanks.
[Robert J. Smith, Thoughts on Verse (Provo: private publication, 2nd ed., 1974), pp. 48–49]

Present Blessing Rooted in Past

This year as I contemplated Thanksgiving—or more accurately this talk for Thanksgiving—I recalled some background from the past which has led to many things for which I am now grateful. I realize that few things come into our possession full blown without roots in the past. Great new ideas—even those arising out of flashes of inspiration—are most often rooted in our experience and background from the past. Similarly, much that we enjoy in terms of material conveniences, family tradition, and educational methods and aspirations developed from past roots. At Thanksgiving time it is appropriate for us to pause to contemplate a little of the road behind us, that the road ahead might have more meaning.

This morning we meet in a beautiful, large facility with multipurposes, but in season emphasizing basketball competition. There are still in existence facilities for basketball which brought us to this comfortable and commodious building. On Sixth North and First East is an old building, the upper floor of which was once BYU’s men’s gymnasium. Within two blocks of that, on University Avenue, is the old gymnasium for women, where intercollegiate basketball games were once played. I well remember BYU’s home games, played in the Springville High gymnasium so that more students and others might see this competitive sport. Many at BYU now remember the tremendous enthusiasm which accompanied the opening of the great new facility, the George Albert Smith Fieldhouse, where most of the games of the Stan Watts era were played. Today’s generation of students knows only this 22,000-seat facility, now one of the finest and largest in the nation.

Other Changes Based in the Past

Our assemblies since my BYU student days have migrated from College Hall on the lower campus, to the Joseph Smith Auditorium, to the George Albert Smith Fieldhouse, and to the Marriott Center. Other University functions have seen like change. Our bookstore was preceded by another in the Herald R. Clark Building, which in turn was preceded by facilities in a temporary barracks building, and, for those of more ancient vintage, a cubbyhole in the basement of College Hall on the lower campus.

Although I do not consider myself old, I have experienced a variety of methods for space heating. Many armloads of wood I personally carried to provide fuel for a stove, which served three purposes—cooking, water heating, and space heating. I have had some experience with fireplace heating, coal heaters, coal furnaces, and fuel oil, and I now use a convenient electrically controlled gas furnace. The current return to wood stoves does not hold the glamour for me that it might for others.

In my early youth we carried water from the well across the street and used water which came off the roof in rainstorms. I’ve seen the installation of a water line in a small community which brought cold water to the kitchen sink. Water was heated in a tank on the wood stove, later by coils attached to a separate hot water tank. Of course, it’s much more convenient to have natural gas or electricity as a source of fuel to provide hot water at any time, day or night.

I have studied under the light of kerosene or coal oil lamps. I went through an era when we used a single, bare electric bulb in the center of the room, and now we use specialized lamps and fluorescent and indirect lighting. All of these experiences give greater appreciation for what we presently enjoy and a sense of wonder as to what the future may bring.

Gratitude for our Forebears

Some traditions, such as membership in the Church, may have several generations behind them, such as mine, whereas many of the student body at BYU find themselves as the first generation in building a tradition of membership in the Lord’s restored Church. Without being exhaustive, for example, many of my progenitors joined the Church in its early days. My great-grandfather Silas Smith was baptized in 1835, and his father, Asahel Smith, had received with gladness the news of the restoration of the gospel through his grandson Joseph Smith, Jr., which he felt was a fulfillment of one of his own prophecies. Two of Silas’s sons accompanied their widowed mother to Nauvoo and later across the plains, arriving in Salt Lake Valley in September 1847. These two both had very large families, and the younger of the two was my grandfather.

Samuel Walker West and his family embraced the gospel in Tennessee and in 1842 migrated to Nauvoo and later moved west with the Saints. His daughter, Emma Seraphine West, pioneered in southern Utah and northern Arizona. Her youngest son is my father.

My grandfather Lorenzo Hill Hatch, was baptized in February 1840 at the age of fifteen in Vermont. The same year his father, mother, grandfather, and grandmother all joined the Church. Lorenzo’s mother died in Vermont; his father died in Nauvoo in 1843. His grandparents died in Winter Quarters and Council Bluffs, but Lorenzo and two brothers began a large Hatch posterity in the Church.

His fourth wife, Alice Hanson, with other members of her family, joined the Church in England in 1854. As a nineteen-year-old young lady, she sailed to the United States and then walked across the plains in a handcart company. Her youngest child is my mother.

The faith and devotion of these ancestors have influenced family tradition and life and have also obviously influenced my feelings and attitude. But in the final analysis, for me—the same as for anyone coming into the Church—whether fifth generation or first—the conversion process was personal and individual.

Thanks for the Influence of Good People

Some things don’t change in quite the same way as others, but we still build on the contribution of others. Who doesn’t remember some influential teacher in one’s life who changed the course of one’s thinking or the direction one has taken? Three or four of my high school teachers are fondly remembered; they greatly influenced my learning and my desire for a college education. Much has happened at BYU during my thirty-four years of employment, plus over ten years’ acquaintance at the University during my student years, including the interim periods while working, serving a mission, and completing a term in the military service by invitation of our government. Five presidents have made their marks on Brigham Young University in that period. Many teachers have sacrificed much to contribute to the ongoing flow of development. You have heard the names of many, but let me suggest a few names that may not be as familiar to you but who, in my opinion, have contributed greatly to my own growth and have greatly influenced my career—Herald R. Clark, H. Val Hoyt, A. Smith Pond, Joseph K. Nicholes, Weldon J. Taylor, Wayne B. Hales, Sidney B. Sperry, Robert K. Thomas—the list could go on. Others would have a similar but different list. Perhaps most of you may have someone whom you have known or currently know who has influenced you in such a way that they might fit the model so well described by my eldest sister in a tribute to our mother:

We need not search among the recounted deeds of the great to find life’s intimate expressions. Her meaningful messages are truly reflected in the humble life of each individual. From the common everyday experiences of humanity, existence moves in the boundless realms of eternity; and so from the life happenings of one fragile being may other personalities be enriched and courage be summoned in the struggle of making human relationships more understandable and pleasant. Such is the aim of every noble soul. [Alice S. Hansen, Sketch of the Life of Lulu Jane Hatch Smith (unpublished, 1938), p. 1]

The Debt We Owe for Present Blessings

As enjoyable as a look back may be—and certainly we should look back and be thankful for those persons and those developments which have brought us to our present state—we need to be thankful that we are endowed with the power to act, the power to think, the responsibility to do things of our own free will and choice. We should be grateful that we live in a land wherein individual initiative and rights are still accepted principles. We can make individual and collective contributions. We can begin that which for others might become tradition and history. In our generation we can hold the lamp of progress in our hand to pass it to the coming generation. At this Thanksgiving time may the brief glance behind to sources of our traditions and current blessings give us determination to carry on, to build, to grow, and to contribute to the progress of mankind. Particularly, may we further the eternal purposes and work of our Father in Heaven, that we might be worthy of the blessings promised to those who devotedly and faithfully pursue the principles of the gospel, that we might have joy and might have in our lives the fruits of the Spirit described by Paul:

That this might be our blessing, I pray humbly in the name of the Lord Jesus Christ. Amen. 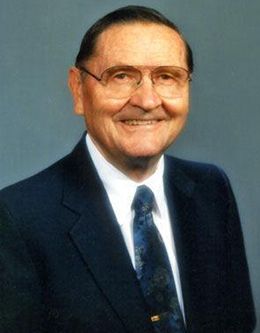 Robert J. Smith was the financial vice-president of BYU when this devotional address was given on 22 November 1983.