We are in the world—and we have come to this university—so that we ourselves might become microcosms of the Divine, that we might have “the image of God engraven” not only upon our countenances but also upon our very existences (Alma 5:19). Of all the microcosms in the world, surely the greatest is the man or woman who strives to become a reflection of the Savior.

In the BYU microcosm, I was “born” in May Hall. When I was “growing up,” my friends and I enjoyed staying up late, playing games, and riding our bicycles. We managed to subsist almost entirely on string cheese and Pop-Tarts, on account of a thing we called “Dining Plus.” We were kids, and we learned how to have fun.

Then the economics midterm came back with a bright red “66” at the top. My first D. It was time to learn how to study. And so, in a secluded carrel on the fourth floor of the library, the BYU-world childhood taught me that too.

After two years in Southeast Asia, in another microcosm of life, I found myself back on campus. In the BYU world I was a young and very single adult, and it was time for me to learn new things, starting with choosing a major and learning how to date.

I awkwardly asked a friend from ninth grade if she would come to an International Cinema movie with me. She said yes, and a couple of years of marriage and a six-month-old little boy later, I’ve begun to learn how to love.

I had a midlife crisis (Do I really want to major in this?) and even learned how to teach a Sunday School lesson.

And over the past four years, like each of you, I have continued learning these same lessons—and others—as I’ve grown and matured in this microcosm of ours.

But now, in the BYU world, we’ve grown old. I, for one, have developed a bad habit of parking my car at the RB and then walking over to the Tanner Building so I can take the elevator up to campus rather than huff and puff up the stairs as young, spry freshmen bound ahead of me. We’ve reached the end of this little world. We have done—here at least—our fair share of learning.

And all of that learning we owe to others. I speak for my class as I address spouses, parents, classmates, professors, the donors of this university, and God in heaven: Thank you. We could not have done it without you.

Ultimately, our experiences here should really just have taught us to become microcosms ourselves. We typically use the word microcosm to reference experiences, places, or things. But the Oxford English Dictionary reveals a much older meaning. It says that microcosm means “human nature or experience [regarded as the representation] in miniature of divine or universal nature.” Paracelsus wrote, “Man is . . . a microcosm, or a little world, because he is an extract from all the stars and planets of the whole firmament, from the earth and the elements; and so he is their quintessence.”

We are in the world—and we have come to this university—so that we ourselves might become microcosms of the Divine, that we might have “the image of God engraven” not only upon our countenances but also upon our very existences (Alma 5:19). Of all the microcosms in the world, surely the greatest is the man or woman who strives to become a reflection of the Savior.

“Enter to Learn,” the sign says. I have. I have learned a little biology, a little Chinese, and a lot of economics. But I am not sure that that is all of what the sign means. And so, now, as we together don our mortarboards to wander off to some other microcosm of life, let’s take the larger lessons with us: how to have fun, how to study, how to love, how to better worship Jesus Christ and become microcosms of the Divine. Because BYU is more than just a university—it’s a little world. And we’ve learned life lessons, not just classroom ones.

Congratulations, fellow graduates, and thank you. 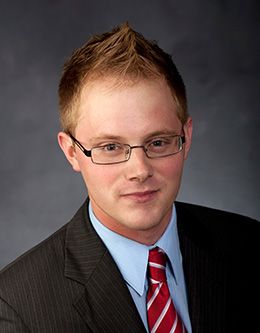 Stephen R.B. Richards spoke as the representative of his graduating class at BYU commencement on 19 April 2012.