In Los Angeles, the weather is hardly ever chilly enough for a body-length down jacket. But here I was, in my bedroom fully zipped up—legs over my bed, body listless—and freezing.

I had just come home from a long day at my office job and was chilled to the point that my hands trembled. I was not just cold, but I felt exhausted, as if I had been running a marathon all day.

My roommate passed by and asked “Are you okay?” She was in a t-shirt.

As I sat on my bed, I did a quick inventory of my body. All the joints on the right side of my body ached, my eyes stung as I blinked, my stomach swelled, and my mind felt completely clouded. I thought about the weeks before that moment, most evenings spent in some version of this.

I then took inventory on the long to-do lists that was perpetually on my mind. I had creative projects to start, church assignments to accomplish, laundry to do, family to call, friends to see, exercise to fit in, weight to lose, an apartment to clean—the list went on and on. I was perpetually in a deficit to my own expectations.

I was only a few years out of college, in a new career, living in a large city, surrounded by people who shared the same level of ambition as I did. But my own internal engine, my “get-up and go,” was at an all-time low.

Just eighteen months before this moment, I sat in a doctor’s office and was diagnosed with Hashimoto’s thyroiditis. Hashimoto’s is an autoimmune disease where the body attacks the thyroid gland, the gland that regulates metabolism, body heat, and energy levels. Some of the most common symptoms are weight gain, hair loss, fatigue, depression, joint pain, and memory loss. Similar to its autoimmune cousins such as lupus, fibromyalgia, and polycystic ovary syndrome, Hashimoto’s can vary in severity due to external influences such as stress, diet, and medication. It is an invisible illness since patients can bear no physical signs of illness.

My doctor’s reaction when he told me the news was calm, and so was mine. He mentioned that it is a fairly common disease and that I would begin taking medication, which would alleviate some of the symptoms. Any issue should eventually go away. I asked him what I should expect now that I was diagnosed. “Oh nothing really,” he said. “You will have this for the rest of your life, but you just need medication.” The solution seemed simple enough.

Even with medicine my symptoms would roller coaster for the next year and a half. My neck swelled, making it difficult to breathe at times, I lost sleep from the chronic pain, and my skin would turn scaly and red near my thyroid.

I would spend hours scouring the internet looking for other solutions, overwhelmed by the volume of medical and anecdotal advice. My symptoms could be triggered by dairy, sugar, gluten, nightshade vegetables, stress, and even toothpaste to name a few.

I found myself committing and recommitting to a full lifestyle change. I was determined to be anything but chronically ill. I was going to strong-arm my way to recovery. It was added to the to-do list. My illness only had part of my attention though, I still had goals that came before it. I had no patience to be inconvenienced by the demands of my body.

I would push and push, finding a way to fill every hour of my day with self-appointed assignments from my to-do lists. If I could not feel good about my health, I could at least feel productive.

But my body always knew what it needed, and when I did not give it rest or support, I would fall into an episode of depression or fatigue.

At the peak of my bad days, I always managed to eke out a prayer—just asking to survive the day. It might have been pride, or a lack of faith, but I hardly pressed God for solutions. I just assumed that this was my problem and I better be an adult and fix it.

I cycled through that pattern for four years. Every time I pushed too hard, I would criticize myself for my own lack of discipline. How could I still be making poor choices for my health, and how was I still so sick? How could I be so weak? It was not just my body that was attacking itself, but my mind as well.

During an especially hard time, I sought a blessing from the bishop of my ward. In the blessing, he spoke of not only God’s promises, but also God’s vision for my illness. He said that I would not be healed any time soon and that this was to be a part of my life for the foreseeable future.

Before this, I was so determined to get to the other side my healing. I had forgotten to ask God what He wanted me to learn from this. I slowly started to come to the realization that this illness was not going to be checked off my to-do list.

I steadily became more patient with my limitations and began to prioritize my health. For a season, my disease and I coexisted in tentative harmony.

The Healing of the Atonement

That quickly changed when I was laid off unexpectedly from my job in 2018. The safety net of steady employment and health insurance were integral parts to my health regimen. With those now in jeopardy, my health began to slip.

A few months later, I fell into a depressive and fatigued state, worse than any other before. Typically, these episodes had lasted two weeks before my body was able to cycle through and feel normal again. This one lasted six months, and the pain was constant and aching. The depression felt darker than any other time in my life, and the stakes of finding a new job and stabilizing my financial situation heightened my anxiety.

I pled more in my prayers; I was buoyed through tiny miracles. Whether it was energy for a hard day, or just enough clarity to remember that I had good days coming. I became more intentional in how I thought about the Atonement in relationship to my own healing.

As Elaine S. Marshal, former dean of the BYU Nursing School, explained in a BYU devotional,

Healing is not only private, it is sacred. . . . There is something so sacred about partaking of the power of the Atonement to overcome suffering, disappointment, or sin that it happens in the privacy of that special relationship between the mortal and the divine. (“Learning the Healer’s Art,” 8 October 2002)

As I sought after the Lord, I became more aware of the healing power of the Atonement, and the many ways I needed to not only heal physically, but emotionally and spiritually. I began to extend myself the same compassion the Lord had been giving me the entire time.

I began viewing the healing of my heart, mind, body, and spirit as one whole venture, with the Atonement at the center. A lot of hard things had to happen for a simple truth to take root in my heart: all healing comes from the Atonement of Jesus Christ.

The illness I had been trying to fight for years was an invitation from God to slow down, and to give myself an opportunity to love myself—to have compassion for myself. 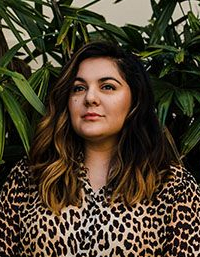 Candice Gutierrez is a filmmaker and entertainment professional who resides in Los Angeles, California. She enjoys telling stories in all forms and is especially fond of documentary films and podcasts. She aspires to always be a good neighbor and a friend who can make you laugh.