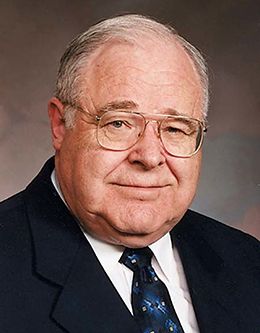 Elder Alexander B. Morrison was called to membership in the First Quorum of the Seventy in April 1987. At the time of his calling as a General Authority, he was a professor and chairman of the Food Science Department at the University of Guelph, Ontario, Canada. He is a former assistant deputy minister of the Department of National Health and Welfare of the govern­ment of Canada, Ottawa, Canada.  Elder Morrison was granted emeritus status in October of 2000.
First recipient in 1984 of BYU’s David M. Kennedy International Service Award, Elder Morrison has been extensively honored for service to his fellowman. He has received the Borden Award of the Nutrition Society of Canada and the Queen’s Jubilee Award. He is a fellow of the Chemical Institute of Canada and of the Royal Society of Medicine. He was honored in 1998 by Catholic Community Ser­vices of Utah for community leadership and service. He earned his doctoral degree at Cornell University.
Elder Morrison has served the Church as a regional representative; bishop of the Ottawa Third Ward; branch president in Ottawa and Evansville, Indiana; a stake president’s counselor; a high councilor; and a welfare region agent.
Elder Morrison and his wife, Shirley E. Brooks, are the parents of eight children.

Service: The Essence of True Religion

Be Ye Men and Women of Valour