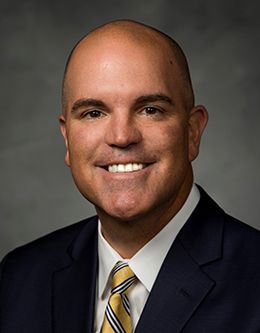 Santiago graduated in 1988 from Provo High School, where he was an all-state performer on the 1987 state championship basketball team. After high school he played basketball and baseball at Utah Valley, where he was All-Conference and All-Region in both sports. He then went on to play basketball at Fresno State. Santiago played professional basketball for the Arecibo Capitanes of the Puerto Rican Superior League and was named to the pre-selection Olympic team for Puerto Rico.

Santiago served a Church mission to the Dominican Republic Santiago Mission, earned an AS in accounting from Utah Valley, a BS in business administration with an emphasis in international business from Fresno State in 1995, and an MBA from BYU’s Marriott School of Management in 2001. Santiago came to BYU in 1997 and was appointed to his current position as Tom Holmoe’s senior associate in the fall of 2008.

He and his wife, Kimberly Blackburn Santiago, are the parents of three sons and one daughter.

Safely on the Lord’s Side