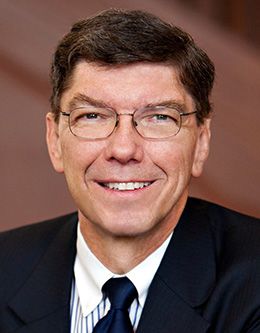 Clayton M. Christensen is the Robert and Jane Cizik Professor of Business Administration at the Harvard Business School. He holds a BA with highest honors in econom­ics from BYU and an MPhil in applied econometrics and the economics of less-developed countries from Oxford University, where he studied as a Rhodes Scholar. He received an MBA and DBA from Harvard Business School.

His research and teaching inter­ests center on the management of technological innovation and find­ing new markets for new technologies. He has authored five books, including The Innovator’s Dilemma: When New Technologies Cause Great Firms to Fail, which received the Global Business Book Award for the best business book published in 1997 and has been translated into ten languages. He advises many of the world’s leading corporations concerning their management of technological innovation. He is the recipient of numerous awards.

Prior to joining the Harvard Business School faculty, Dr. Christensen was chairman and presi­dent of Ceramics Process Systems Corporation, a firm he cofounded with several MIT professors. CPS continues to be a leading developer of products and manufacturing pro­cesses using high-technology mate­rials. He has also worked as a consul­tant and project manager with the Boston Consulting Group.

In 1982 Christensen was named a White House Fellow and served in the Reagan Administration as assis­tant to U.S. Transportation Secretaries Drew Lewis and Elizabeth Dole.

Dr. Christensen also served as an Area Authority Seventy in the North America Northeast area. He and his wife, Christine, are the par­ents of five children.

Dealing with the Dangers of Success