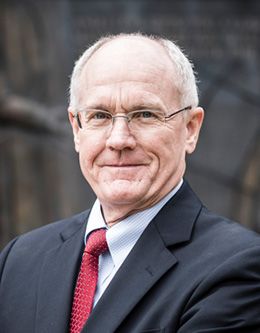 While living in Logan, Utah, David met and married Tina Rigby. Although he’s not one for favorites—his favorite ice cream flavor, for example, is whatever is in front of him, and the same can be said for his favorite scripture—he has stated that Tina is his favorite! He has expressed his gratitude for her constant support during some of their intense but rewarding work. They are the proud parents of three children and are proud grandparents as well.

Whitchurch taught for the Church Educational System for twenty years and has been at BYU full-time since 1998. He says that because he grew up around the University of Utah, which was always his school of choice and which was where all his brothers went to school, he never expected to teach at BYU. However, though he still loves the U, he finds something extraordinary about being at BYU and following the Lord’s mandate to “seek learning, even by study and also by faith” (D&C 88:118). His teaching career has allowed him to live in various places in Utah, the Southwest United States, western Canada, and the Middle East. He has had four assignments at BYU’s Jerusalem Center for Near Eastern Studies, including a three-year post as associate director of the center’s academic program.

Whitchurch’s publications include articles and books on the history of the English Bible and symbolic understandings of artifacts discovered in Egypt as well as soon-to-be-published historical letters between Joseph F. Smith and his sister Martha Ann Smith Harris. However, Whitchurch reports that the most exciting aspect of his job is witnessing students learn for the right reasons. He says that there is always more to learn and more to teach and that his job never gets old.