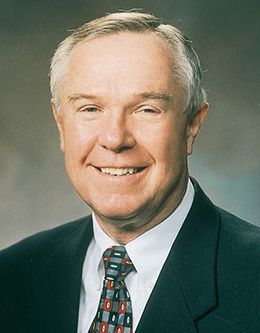 Elder Dennis B. Neuenschwander is best known for his missionary efforts that began in eastern Europe with his service as a young man. While serving as a missionary for the Church in Finland, he taught the gospel to the people and then taught the Finnish language to other missionaries. He developed an interest in languages and, on returning home, decided that the best way to pursue this interest was through his education. He received an associate’s degree at Weber State College, a bachelor’s degree at Brigham Young University, and a PhD in Russian literature from Syracuse University.

During and for a short time after his education, Elder Neuenschwander taught Russian at the University of Utah and BYU. In 1975, he accepted a position with the Church’s Genealogical Department, where he was responsible for helping to establish microfilming projects throughout eastern Europe. He was no longer doing missionary work for the living, but for those who had already passed on. He later managed the department’s international area of the Acquisitions Division.

In 1987, he and his first wife, LeAnn Clement, were called to preside over the Austria Vienna East Mission, which included Poland, Czechoslovakia, Hungary, Yugoslavia, Greece, Egypt, Turkey, and Cyprus. At the conclusion of their mission, the First Presidency asked Elder and Sister Neuenschwander to stay an extra year to direct new missionary efforts in Bulgaria, Romania, and Ukraine and other parts of the Soviet Union. Elder Neuenschwander worked closely with the members of the Quorum of the Twelve Apostles to place missionaries and establish the Church in these countries. He was instrumental in bringing the gospel to many former Soviet bloc countries.

After forty-four years of marriage, Sister LeAnn Neuenschwander passed away in 2007 following a long battle with cancer. The two had four children together. Elder Neuenschwander later married Joni Kay Lee in the Salt Lake Temple.

In March of 2018, Elder Neuenschwander was named honorary consul to Belarus for Utah. In this position, he continues to help foster Belarus’s relationships with Utah and the Church. By working on projects that encourage technical and educational collaboration, guide humanitarian aid, and create economic opportunities, Elder Neuenschwander hopes to continue to serve the people of Belarus.