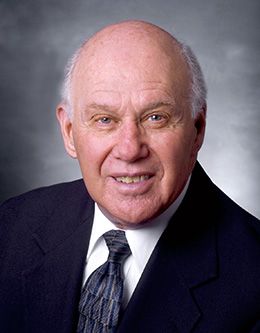 A native of Ogden, Utah, Dr. Donovan J. Fleming spent two years in the U.S. Navy during the Korean War and then enrolled at BYU, earning bachelor’s and master’s degrees. He earned his doctorate in experimental psychology with an emphasis in behavioral neurobiology from Washington State University.
Following his doctoral work, Dr. Fleming held appointments with the Veterans Affairs Medical Center in Salt Lake City and with the Departments of Neurology and Psychology at the University of Utah. He later transferred to the VA Medical Center in Phoenix, Arizona, to become director of its Neuropsychological Research Laboratory and was appointed a visiting professor at Arizona State University.
Dr. Fleming joined the BYU faculty in 1971 as a professor of psychology. He has chaired the Department of Psychology and has served as dean of the College of Family, Home, and Social Sciences. He has been an active researcher, having published more than 75 journal articles and abstracts. He has received the Karl G. Maeser Research Award and is a past president of the Utah Psychological Association.
His Church service includes being a Scoutmaster, Explorer advisor, stake and ward Young Men president, elders quorum president twice, stake missionary, seventies quorum president, bishop of two wards, stake president, and president of the Colo­rado Denver South Mission.
He has served as vice president of the Utah National Parks Council and as vice president of the Mountain West Area. He holds Scouting’s Silver Beaver and Silver Antelope awards.
Professor Fleming is married to Ruth Hacking.