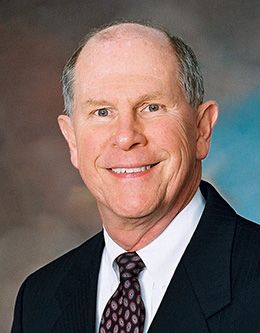 Elder Gene R. Cook’s life is distinguished by his firm testimony and the early age at which he gained it. As a young boy, he read the Book of Mormon and fasted and prayed to know of its divine nature. He continued to study the book of scripture over the years as he prepared to serve a full-time mission. He was called to serve in Uruguay and Paraguay, where he was greatly influenced by his mission president, President J. Thomas Fyans. President Fyans taught about leadership and trusting in the Lord. Upon returning from his mission, Elder Cook graduated from Arizona State University with his MBA.

After graduation, Elder Cook went into the insurance industry. Eventually, unsatisfied with this life, he moved his family to Utah where he worked for the Church Personnel Department, using his knowledge of insurance to help him along the way. Before being called to the First Quorum of the Seventy, he served as an area president of the North America Southeast, North America West, and Mexico/Central America Areas; counselor in several area presidencies; area executive administrator to the Chile and Andes areas; president of the Uruguay-Paraguay Mission; and a regional representative in Mexico, Argentina, the United States, and Canada. For three years, he served as executive secretary to the First Council of the Seventy. He was named to the council in 1975. As a member of this council, he authored several books on important gospel principles and how to apply them in daily life.

Elder Cook’s talks at BYU have focused on trusting in the Lord, seeking eternal happiness, and enduring trials with the help of the Savior. He shares his wisdom in the hope that others will find peace and strengthen their testimonies through his words. He and his wife Janelle are the parents of eight children.

The Love of God: Suffering Tribulation in the Redeemer’s Name

Trust in the Lord

Faith in the Lord Jesus Christ