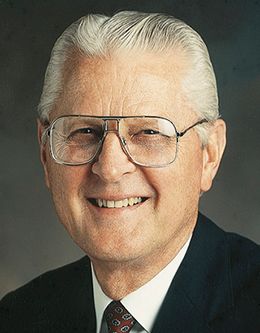 The son of Harold Anton and Juna Tye Peterson, Harold Burke Peterson was born on September 19, 1923, and grew up in Phoenix, Arizona. After graduating from high school, he attended Phoenix College for two years. Upon the United States’ entrance into World War II, Peterson joined the U.S. Navy in 1942. After completing a civil engineering course at the University of Oklahoma, he was commissioned an ensign in the Navy Engineer Corps (Seabees). Peterson served in the Pacific theater for two years and returned to America in June 1946.

Peterson earned a bachelor of science degree from the University of Arizona. While there, he received one memorable invitation to a girls’ choice Halloween dance. The invitation came from Brookie Cardon of Tucson, Arizona, whom he barely knew at the time. Peterson recalls, “I felt we should be better acquainted before we went to the dance, so I asked her to a movie first, and that’s how it started.” They were engaged after two months and were married on June 27, 1947, in the Arizona Temple. The Petersons became parents of five girls and have adopted this parenting motto: “When we give time to the children, we should make it meaningful.” From family home evenings to early morning scripture studies to random notes expressing love, Peterson and his wife have been involved parents, always putting family first.

Although he had planned to attend Stanford University to obtain his master’s degree, Peterson instead got an offer to teach at the Utah State Agricultural College (now Utah State University) while he earned his degree. He accepted the offer, and after graduating from Utah State, he began working with the Federal Soil Conservation Service of the U.S. Department of Agriculture. In 1952 he left the government to work at a grain storage facility in Mesa, Arizona, and then three years later formed a civil engineering firm with two of his associates from the Church. They established the Engineering Corporation of America in 1955.

Despite his demanding work schedule and his dedication to his family, Peterson was also devoted to serving the Lord. He held various positions in the Church, including bishop, stake president, and regional representative for the Phoenix, Mesa, and Tempe regions. In 1972 Peterson was called to be the first counselor in the Presiding Bishopric, a calling in which he served for 13 years. Upon his release, he was appointed to be a member in the First Quorum of the Seventy and the president of the Jordan River Utah Temple (1985–1987). Elder Peterson was granted emeritus General Authority status on October 1993, and passed away on April 14, 2013, in his home in Bountiful, Utah.

Elder Peterson was known for his testimony on the power of prayer. On two occasions, he delivered devotional addresses at Brigham Young University on prayer, saying that Heavenly Father always hears our prayers, but we must be receptive enough to the Spirit to discern His answers. Elder Peterson gave four other speeches on topics including happiness, eternal destiny, and refining ourselves through trials. In each talk, Elder Peterson’s insights provide words of wisdom and encouragement to those who read or listen to them.

Stones in the Wall

Come unto Christ Through Your Trials

A Glimpse of Glory