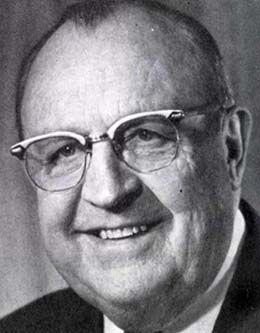 One of twelve children, James Alfred Cullimore was born January 17, 1906 in Lindon, Utah. His father’s work as the owner of a grocery store provided James with his first experience in retail, which he would later study and from which he would build his profession. His father was also a bishop and gave James an important example of Church service and leadership that would characterize James’s adult life.

Upon graduating from high school, the young James A. Cullimore began his undergraduate studies at Brigham Young University. In 1925, a year after enrolling at the university, he set off to serve as a missionary in California. He then returned to BYU, where he was elected student body president his senior year. He graduated in 1931, and that same year he married Grace Gardner, whom he met at BYU, in the Salt Lake Temple. They had three children, Kelvyn, Luella, and Nancy.

James A. Cullimore received a scholarship to attend New York University’s School of Retailing, where he earned a master’s degree in 1932. He began working in New York City as a furniture buyer for Gimbels department store. He then worked in Chicago, Sioux City, Iowa, and Oklahoma City. He opened his own furniture store in Oklahoma City in 1946 and was met with rapid success.

Having served as a branch and district president in Oklahoma, James A. Cullimore was called as the first president of the Oklahoma Stake in 1960. He served in that position only a few weeks, however, before being called to preside over the Central British Mission. Returning to the United States three years later, he served as a member of the Church’s Priesthood Welfare Committee. In 1966 he became a general authority seventy, serving first as an assistant to the Quorum of the Twelve Apostles and then in the First Quorum of the Seventy before being granted emeritus status in 1978.