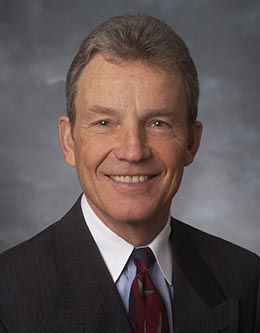 While at BYU, Dr. K. Fred Skousen served as the Advancement Vice President, dean of the Marriott School of Management, and director of the School of Accountancy. He earned his bachelor’s degree from BYU and master’s and doc­toral degrees from the University of Illi­nois. He is a certified public accountant.
Brother Skousen has been a consul­tant to the Financial Executive Research Foundation, the Controller General of the United States, the Federal Trade Com­mission, and several large companies. He was a faculty resident on the staff of the Securities and Exchange Commission in Washington, DC (1969); he was a faculty fellow with Price Waterhouse & Company in Los Angeles (1973); and he served on several corporate boards of directors.
A recipient of numerous awards and recognitions for his professional, administrative, and teaching excellence, Dr. Skousen was appointed to the Nation­al Commission on Professional Account­ing in Education in 1982 and served as director of research and Executive Committee member of the American Accounting Association (1974–76). He is past president of the Utah Association of CPAs. Dr. Skousen is author or coauthor of more than 50 articles, research reports, and books.
Besides serving on high councils and as a counselor in three bishoprics, Brother Skousen has twice served as bishop, once in a BYU ward. He has also held many posi­tions in the Young Men organization. He served a mission in northern California.
Brother Skousen is married to Julie Nielsen, and they have five sons and one daughter.