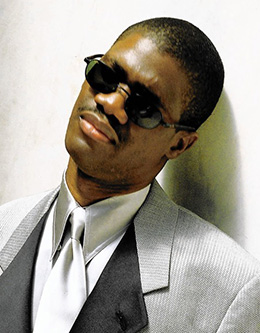 Marcus Roberts began teaching himself to play piano at age five after losing his sight, but he didn’t have his first formal lesson until age 12. Despite the late start, he progressed quickly and at age 18 went on to study classical piano at Florida State University with the great Leonidas Lipovetsky, whose own teacher was the celebrated Madame Rosina Lhévinne. Roberts is an associate professor of music at Florida State University, and he holds an honorary doctor of music degree from The Juilliard School.

While Roberts is known for his ability to blend jazz and classical idioms to create something wholly new, he is perhaps even better known for his development of an entirely new approach to jazz trio performance. Roberts tours with his long-standing trio featuring Rodney Jordan (bass) and Jason Marsalis (drums). In the fall of 2017, he released his newest recording called Trio Crescent: Celebrating Coltrane.

One of Roberts’ more recent musical projects is the founding of The Modern Jazz Generation band. This multigenerational ensemble is the realization of Roberts’ long-standing dedication to training and mentoring younger jazz musicians.

Marcus Roberts has partnered in recent years with BYU professor Greg Clark to educate others about what jazz music brings to the conversation about democracy and the art of getting along. His forum address is a blend of spectacular music and wise counsel centered on the topic of democracy and music.